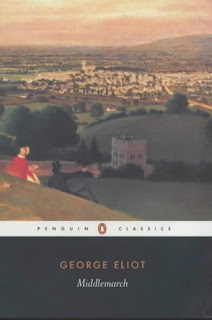 I'm not fussy when it comes to books and I read a variety of genres for different reasons: romance when I'm feeling squishy and in need of cheering up, fantasy for escape, crime and adventure stories for the excitement, kids' and teen fiction for nostalgia's sake, to recapture the innocence (or not) of days gone by. But most importantly of all, I read about people. Sometimes that's all I want in a story. The other day I found it very difficult to find a film in the DVD shop that was just about people - not romance, not the sort of adventures that don't tend to happen in real life, just a story about ordinary people doing ordinary things.

Middlemarch is very much a character-based story, focusing on various residents of a small English town at a time of social and political change. Although the country may be a very different place in twenty first century, where people travel further afield as a matter of course, and technology is the world's defining feature, Middlemarch's characters could quite well be living among us. Eliot deftly brings her characters to life and allows us to see everyone's motivations and thought processes, so that even as we recognise their foolish or self-deluding motivations, we have, if not always sympathy, an in-depth understanding of even the most unpleasant characters seen from both outside and within.

First, there's Dorothea Brooke, a very modern woman for the nineteenth century: good-hearted and intelligent, if rather naive, with a scientific mind. She chooses to marry an older man, Mr Casaubon, in the hopes of assisting his great works as an equal. Mr Casaubon, in theory, is keen on the idea of a beautiful young wife who understands his life's work, but both he and Dorothea are doomed to disappointment and frustration. When it comes down to it, Mr Casaubon finds that his wife's beauty draws unwanted attention from younger men, provoking his jealousy. Her understanding of his work is a nuisance to him, because she might have her own ideas about it, which don't suit him.

Then we have Fred Vincy, university-leaver who is full of good intentions, but ultimately doesn't know what he wants to do with his life. In Vincy I was reminded of Richard in Dickens' Bleak House, trying out one profession after another, but I was also reminded of many of my contemporaries - as well as myself - trying to find our place in the world. And we meet Dr Lydgate, who is new to Middlemarch and whose unfamiliarity, high ideals and new methods are met with distrust from his patients. Lydgate's marriage to the spoilt Rosamund is strained by their spending what they cannot afford, and even more by the persistant lack of communication between husband and wife, who each go their merry way without thought for the other. All too familiar are the consequences of such a relationship.

A contemptible character is a money-lender named Bulstrode, a self-righteous, self-justifying hypocrite whose attempts to keep an unsavoury past buried become increasing desperate throughout the novel. Not that we have any modern examples of such corruption in people who hold positions of power over others(!)
I decided to read Middlemarch after watching the first part of a BBC adaptation several years ago, as I generally prefer to read books before watching film or TV adaptations. Although it took me about three years to get around to starting, and many months to finish Middlemarch, reading just a few chapters between lighter works, this isn't through lack of enjoyment so much as a wish to savour the novel, and it has always been easy to pick up where I've left off the last time. Now I've finished, I'm going to feel quite at a loss without it on my desk, where it has lived since the summer.