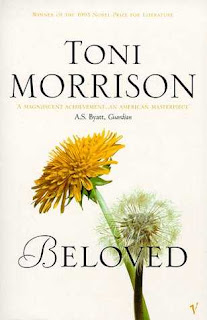 I chose to read Beloved as part of Sarah's Back to the Classics challenge, as it was a regular title to appear on lists of books banned from school libraries. Looking it up on Goodreads, opinions were polarized: reviewers either loved or hated Beloved and could not understand any other point of view. I decided to give the book a 50-page or 3-chapter trial, and decide at that point whether or not it was for me.
Beloved tells the story of Sethe, a former slave who chose to kill her small daughter rather than allow her to be taken back into slavery. After many years of mysterious activity in Sethe's home, a young woman appears at her door who calls herself Beloved - the name on the child's gravestone - and who knows things that only Sethe's children ever knew. Is this girl Sethe's daughter miraculously returned to her, or does Beloved have a more sinister purpose?
When reading Beloved I had no difficulty in understanding why it is a regular banned book. With themes of infanticide, cruelty, rape and torture, Beloved is a dark, disturbing novel, not suitable for young or sensitive readers. However, I found myself wondering if people call for its censorship out of discomfort, not wanting to look closely at a shameful era of history; one which, like Beloved, will not stay dead. 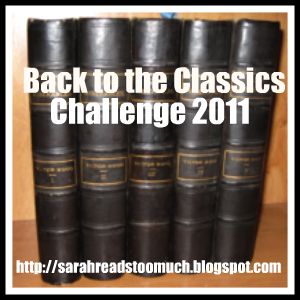 I have to say, I didn't really enjoy Beloved. Beside the obvious, that it covers subjects highly unpleasant to think about, I found the writing style very patchy. Though Morrison's writing can be beautiful and poetic, I found it somewhat dense and at times impenetrable. I tuned in and out of the writing and sometimes found myself reading a few pages without really taking in what was going on. She switches between characters, past and present and first and third person narration with little warning, and if I'd put the book down it took me a little while to be able to tune back in to what was going on at a particular point. At one point, the book took on a stream of consciousness style which, although full of fascinating language and imagery, I confess I couldn't get its meaning. I think my personal preference of storytelling is more traditional.
And yet, when I reached the end, I found myself unable to let Beloved go, feeling that it needs at least a second reading to get everything out of it. Perhaps more. I didn't always enjoy reading it - and yet, I felt the need to do so again. Love it or hate it, or if, like me, you don't quite know what to make of it, ultimately Beloved is an important work of literature which deserves its place as a classic.