The Pirates! In An Adventure with Scientists, Gideon Defoe 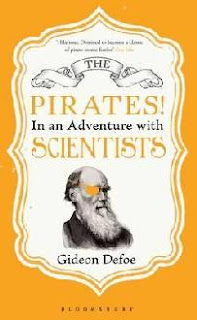 Apologies for the lack of recent reviews. I'd been in a bit of a reading slump, having £20 to spend in Waterstone's and not finding anything I wanted to buy with that money! It is a strange feeling for me, and quite unnatural. But upon seeing The Pirates! In an Adventure with Scientists, I remembered Hanna's review and thought this might well be the thing to make me want to pick up a book again. It seemed to work. My next stop was a coffee shop, where I proceeded to embarrass myself by giggling a lot at this book.

The Pirates! In An Adventure with Scientists is a rollicking adventure featuring a crew of very stupid pirates who find themselves... surprise, surprise... caught up in an adventure with scientists. Namely, a young Charles Darwin, along with his trained monkey, Mr Bobo. I think every child at one point in their life has a dream of becoming a pirate, and Gideon Defoe plays with the childish impression of piracy on the high seas - lots of roaring "arrrgh!" to fill in time between adventures - and thumbs his nose at the idea of any kind of realism. The Pirates!...& Scientists is written in a very simplistic style of prose, packed with deliberate anachronisms for comic effect. The whole thing read like a cross between Monty Python, Lemony Snicket and the Them's version of the Spanish Inquisition in Good Omens. (Art thou a witch, Viva Espana?)


Although it reads rather like it was written by an overimaginative ten-year-old making things up as s/he goes along - which is not meant as a criticism, because ten-year-olds have not yet grown out of pure creativity - there was just enough satirical commentary beneath the silliness to demonstrate that it was not as simple as it seemed - though mostly it's just a very enthusiastic adventure, with a bit of innuendo, a lot of slapstick and a couple of lines that had to be references to popular culture, such as the Pirate Captain's "brilliant impression of what a lady sounded like," and his failure to spot an approaching hurricane.* The Pirates!...& Scientists is a quick read, slightly surreal, very silly indeed, and simply a lot of fun.

The Pirates! In An Adventure with Scientists has been adapted as an animated film by Aardman (the people behind Wallace and Gromit) with an all-star cast headed up by Hugh Grant as the Pirate Captain and David Tennant as Charles Darwin. I'm wondering if this might be a good use of my Cineworld gift card... (Elsewhere the movie is called The Pirates! Band of Misfits for some mysterious reason.)


*In 1987, Michael Fish, a BBC weatherman, infamously reported: "Earlier on today, apparently, a woman rang the BBC and said she heard there was a hurricane on the way; well, if you're watching, don't worry, there isn't."


(Well... not technically a hurricane, but the worst storm including hurricane-force winds that Britain's known in my lifetime.)
Posted by Katie Edwards at 21:36