A Dance with Dragons, part two: After the Feast, George R. R. Martin 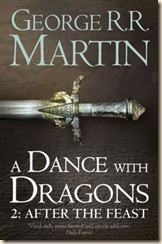 This afternoon, a lady came into the shop where I work and asked for the sixth book of A Song of Ice and Fire. I had to break to her that The Winds of Winter is, in all probability, still on George R R Martin’s personal computer, and that having finished the series so far only an hour previously, I shared her pain. The only consolation I had to offer was that at least we had a year and a half less of a wait than those who had read Dance With Dragons when it was first published in hardcover, and that we had been spared the six-year wait before that.

Quite what Martin had been doing between 2005 and 2011 is his own business – writing Dance With Dragons was certainly no mean feat, and even authors with rabid fanbases need time for holidays, spring-cleaning and walking the goldfish. I suspect that Martin did a little bit of exploring in the forgotten depths of the dictionary, and excavated a new word – “leal” (adj. – loyal, true, faithful) which was proudly displayed on every other page - along with the misuse of “wroth” – angry, in place of “wrath” – anger, which towards the end made me wroth indeed.

Vocabulary aside, let’s get onto the story. I found that part two dragged somewhat, confirming my suspicion that books 4 and 5 were more about moving characters to where they were needed, than advancing the plot. Many characters seem to be taking a long time with many circumlocutions to go nowhere. Less attention was paid to the characters I cared for or was interested in, with the focus moving to one-chapter points of view, newer characters who are more vague acquaintances than friends or fierce enemies. Arya and Bran Stark seem to have found their final destinations far away from the action of the plot, and I can’t see how they might get back into the main story now. Tyrion,who is always entertaining, got himself sold into slavery in Daenerys’ part of the world, then weasled his way out of it to join with a gang of mercenaries – but the whole thing came off as rather a shaggy-dog story. But he’s still alive, for now. (Direwolf Shaggydog and his master Rickon Stark haven’t been seen and barely heard of since Clash of Kings.)

The focus of Dance With Dragons has moved away from Westeros to the former slave city of Meereen, where Daenerys has announced herself queen. Her Queenship, though made of good intentions, has not been going so well, and in an attempt to keep the peace, she has married a shifty character with whom she now shares the crown. Only he may or may not have tried to kill her, and now Dany has disappeared on the back of a dragon to who-knows-where, believed by many to be dead. I found the chapters centred around Dany, or her absence, quite disappointing, but the final one is eerie and dreamlike. In it we are reminded of what seemed to be a poetic piece of rhetoric, a long-winded way of saying that Daenerys would never see her first husband again. But details in this chapter hint that perhaps the improbable is not impossible. “When seas go dry” – Daenerys is at this point located on “the Dothraki sea,” an endless plain of grass “and mountains blow in the wind like leaves.” – we are treated to vivid descriptions of the grass blowing on the hills. Daenerys appears ready to start another grand chapter in her queenly career.

Elsewhere, Martin strikes one of his trademark blows. Jon Snow has been Lord Commander of the Night’s Watch, up at the Wall to the north of Westeros. And he’s taken his role very seriously indeed, reminding his unwilling men that they have vowed to stay out of politics and defend “the world of men” – not just the Westerosi men. The men of the watch didn’t like that, though, preferring to think of the “wildlings” as their enemies, and ignoring the real, supernatural threat to mankind.

Then, once, Jon gets a letter that prompts him to do one selfish act, and for this he is - apparently - stabbed to death.

Though perhaps a bit of a goody-goody, I've always had a vague sense that Jon Snow is the real central figure of Song of Ice and Fire. (Then again, we thought that of Ned Stark before he suffered Sean Bean Syndrome in Game of Thrones.) The whole Stark family seems to be becoming more and more peripheral to the plot, and I'm not entirely sure who is to take their place. Daenerys? The surviving Lannisters? Little Tommen?

No, Martin, you can’t do that.

And I’m not entirely convinced he did do that. Jon’s last conscious thoughts are the last we see of this development, and without producing a body – especially with a detached head – I’m not going to be fooled. Martin has “killed off” so many characters, just to produce them alive and sometimes well, that I just don’t trust him any more.
Politics have been quiet at capital city King’s Landing. Queen Regent Cersei is imprisoned and disgraced, and with Jaime and Tyrion absent, and Joffrey and Tywin dead, the Lannisters are no longer the power in those parts. Who’s running the place now? Cersei’s uncle Kevan seems to have a measure of control, but it looks like the mad scheming is over.

Then came the epilogue. Oops! My mistake.

Write, George, write like the wind.
Posted by Katie Edwards at 22:49