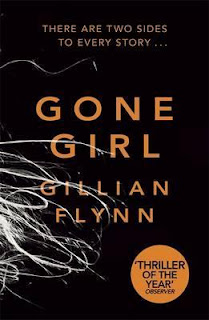 After Amy Dunne disappears on her fifth wedding anniversary, her husband Nick is the first suspect. Though he maintains his innocence, desperate in his search to find out what has happened to his wife and to clear his name, the evidence appears damning. Chapters alternating between Amy's diary and Nick's contemporary narration reveal that the Dunne's marriage had been unhappy for a long time. In fact, it seems that Amy and Nick didn't even know each other any more. Their accounts of events in the past, and of each other's thoughts, moods and reactions, show a couple shockingly out of tune with each other.

These conflicting accounts keep the pages turning, switching the reader's allegiance between Nick and Amy, at least at first, while causing us to question if either party can actually be trusted. Nick, in particular, in the first half of the novel, showed the signs of being an unreliable narrator by withholding information, not only from the police, but also from the reader. His cell phone rings, and he turns it off, not telling who is calling, or mentioning it again - until the next time. He is questioned about an overheard argument - an argument he has not described. He claims to be a writer, and yet describes his father-in-law is "literally losing his head."

And then, halfway through, there is a momentous twist, and everything we think we have figured out about Amy, Nick and their marriage turns on its head. I was completely taken by surprise! The second half of the novel. The case plays out like a deadly game between ruthless, manipulative players taking turns. Both Amy and Nick reveal themselves to be highly unpleasant characters in a toxic relationship, and it's difficult to root for either one. The pages keep turning of their own accord as the story heads for a climax, and from a reader's point of view, you want something huge to happen, but you know it can't end well for both. Can there be a winner, or only losers?

Gone Girl starts off as a fairly straight-forward crime thriller, but turns out very different indeed: clever, but very twisted, dark and unsettling. You might want to read something cute and wholesome after this one.