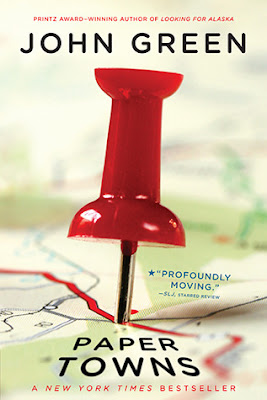 In the middle of the night, Quentin "Q" Jacobsen's next-door neighbour and long-term crush Margo Roth Spiegelman appears at his bedroom window and bids him come with her on an adventure - a campaign of revenge. The next day, Margo is missing. It's not the first time Margo has disappeared, but Q is worried. He makes it his mission to find Margo, uncovering some cunningly hidden clues about her whereabouts. But finding Margo's physical location turns out to be just the beginning of the challenge. In their hunt to find her, Q and his friends realise that not one of them can be sure they ever really knew Margo. Paper Towns is as much about uncovering Margo as a real person as it is about finding where she is hiding.

Is it terrible to say that I really like revenge stories? The escapades Q and Margo embark upon are an entertaining take on the usual "bring down the mean girl" high school drama. To give you a sense of the duo's unusual pranks I will duplicate Margo's shopping list. (N.B. random capitalisations are Margo's.)

one Can of blue Spray paint."


I will not give the game away about what they do with these items - you can use your imagination or read the book yourself. Needless to say, it was hilarious, with a touch of the guilt you feel for enjoying watching people get what they deserve.

But Paper Towns is not really a revenge story, not after that beginning. It soon becomes a mystery, a sort of treasure-hunt to find Margo, who seems not to want to be found, but leaves obscure clues for Q to figure out nonetheless. And if there's anything I like better in a novel for teenagers than revenge plots, it's mysteries and treasure hunts. Not that I expect to be able to work it out before the protagonists, and nor do I really want to. I enjoy the thrill of being utterly clueless about the author's intentions, of being surprised and trusting them to make it all make sense in the end. Margo's treasure-hunt takes Q and his friends, Ben, Radar and Lacey through Walt Whitman's poetry (note to self: must read some more Whitman) to a seriously creepy office in an abandoned mini-mall, and ends up sending them on a race-against-time road trip from Florida to a non-existant town in New York state, the boys wearing nothing but their graduation gowns. It's a riot, a page-turner, and Q's ticking clock - will they reach New York in time? - adds to the sense of urgency. By this point I was racing through the book as though I too would run out of time.

I may have mentioned before that I really love John Green's books. They have a unique nerdy appeal, with smart, sarcastic and funny characters, and weird little details that just make the books stand out against the rest. In Paper Towns we have Urban Exploring, the world's largest black Santa collection, a teenage boy in a "World's Best Grandma" t-shirt, cross-hatched writing to make a notebook's contents illegible to anyone except the writer. I have since adopted this, as I could find myself in Harriet The Spy trouble if I were to accidentally leave my notebooks lying around.  And of course there are the titular Paper Towns, which are fictional locations invented by mapmakers in order to identify breaches of copyright. All fascinating stuff, and I loved it. But it's not all just quirks and chuckles; Paper Towns makes the reader think about how we view others - as real people or supporting characters in our own lives? Can we ever truly know another person - and if so, how?