Hello dear readers! Apologies for the lack of recent reviews or posts. There's not been a lot of reading happening lately, and most of what I have been reading has been rereading of old favourites. But this week's Top Ten Tuesday prompt got me thinking about my old favourite books, from the days before I started my book blog. I'm not going to include any of the books that are still favourites and as such have been reviewed on rereads, so I've found it interesting to think back over the books that I used to love, and those which are really due a reread.

I wrote about this on my (now deleted) personal blog, but all I could find to write was "JUST READ IT!" The Book Thief shows a little girl growing up in Germany during World War 2, but in a unique twist, the author is Death. This does not make the book a morbid read, but Death's matter-of-fact tones really highlight the beauty and tragedy of the story in an understated way. (I really have to reread this!)

When I finished my degree, I realised I'd hardly studied any Dickens in the entire three years - a shocking state of affairs! Though it took me a while to get into the book the first time - so many characters, and it takes a bit of time to figure out how they fit together, who are the main characters and who is in a supporting role - by the time we got to the French Revolution scenes I was hooked. I was holding my breath with worry for some of the characters and completely stunned by the well-known twist ending. This book left me with a serious book hangover.

Long before the trend for fairy-tale retellings came the Bitterbynde trilogy from Cecelia Dart-Thornton. Though very, very verbose, the series, beginning with The Ill-Made Mute draws on ancient Celtic mythology and well-known fairy-tales to weave a rich, uncanny tapestry, opening a little window onto a dangerous fairyland. 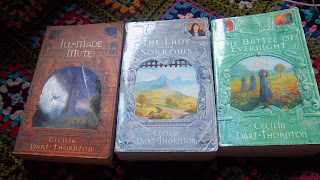 The main reason I initially read this book was because my Cornwall-based friend from university assumed I'd read it and I didn't have the heart to disillusion her. It was well worth it - an eerie, suspense-filled novel of a young woman haunted by the memory of her husband's first wife. I find myself reminded somewhat of Jane Eyre.

5. I Capture the Castle - Dodie Smith

"I write this sitting in the kitchen sink." How can you not love a book which opens thus? I Capture the Castle is a quirky story of family, growing up and falling in love, and has been made into a film starring Romola Garai and Bill Nighy.

Fantasy always has to come in trilogies, doesn't it? This was the first high fantasy I read after Lord of the Rings sucked me into the genre, and I fell in love with it. I later read Eddings' Belgariad series, and maintain that whichever Eddings story you read first will be the one you like best - because he has one story, one set of character archetypes, which he used many times in different ways. Recently I tried to reread the series, and alas, the years were not kind. The fantasy-names felt made-up, the archaic speech felt fake, the plot full of cliches. The Elenium was saved a little by humour and likable characters, but maybe it's not fair to include The Elenium in a top ten of anything. Still, it played an important role in helping me fall in love with fantasy. 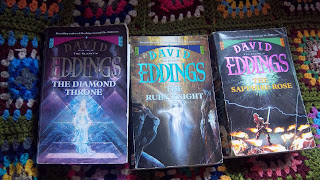 7. Interview With the Vampire - Anne Rice
I read this as a semi-gothic student, little knowing quite how far its brooding protagonist would set the standard for angsty, self-loathing vampires everywhere.

This is perhaps one of the darkest books in the Discworld series, but also the best. Les Miserables crossed with Life on Mars - except this was published before Life on Mars. This is one of the City Watch sub-series, but with a twist, because Sam Vimes is caught in a magical storm and sent thirty years back in time, when Ankh Morpork was a much more dangerous place, and it's up to Vimes to sort out the mess, tutor his younger self, and minimise the damage, when all he wants is to get home to his wife and unborn son. Truth! Justice! Freedom! Reasonably Priced Love! And a Hard Boiled Egg!

A simple story about family and the past, which I found at just the right time. When Eve Green is expecting her first child, she returns to the Welsh village where she grew up. The story is told in flashbacks to the summer when another little girl went missing, as Eve pieces together the secrets that have been kept from her, and the forgotten memories. Eve Green is a quiet novel, but a cosy read.

10. The House at Riverton - Kate Morton

Kate Morton's books seem to follow a particular formula: two stories, separated by many decades but linked in some way, a big house, forgotten secrets and family mysteries. The link in The House at Riverton is an elderly woman (in the present day) who used to work at the house as a maid, at the time of a young man's suicide. Tangled up in the story is the relationship between three young people: the man and two sisters, and the novel is reminiscent of Ian McEwan's Atonement. It may be an unpopular opinion, but Riverton is the novel I'd hoped Atonement would be but wasn't. I read the entire 600 or so pages in a single lazy Saturday. I couldn't put it down.
Posted by Katie Edwards at 16:29