Next week, ITV1 will be showing a compilation of the top 50 moments from the Harry Potter films. This got me wondering about what my top 50 moments were, in both film and book. Contains plot details of the whole series.

50. The Sorting Hat. (Philosopher's Stone)
49. The Time-turner. "If all goes well, you will be able to save more than one innocent life tonight." (Prisoner of Azkaban)
48. "This is what Dumbledore sends his defender. A songbird and an old hat!" A hat containing the sword of Gryffindor, which will only present itself to the most loyal Gryffindors. And the phoenix, whose tears heal any wound. Just what Harry needed. (Chamber of Secrets)
47. Hermione the rebel. "I don't know what's got into you lately!" said Ron, astounded. "First you hit Malfoy, then you walk out on Professor Trelawney - " Hermione looked rather flattered. (Prisoner of Azkaban,)
46. Professor McGonagall: "I always wanted to use that spell!" (Deathly Hallows, Part 2 - film.)
45. Ron: "Why couldn't it have been 'follow the butterflies?'" (Chamber of Secrets, film)
44. The Weasley Twins' attempt at fooling the age line around the Goblet of Fire - and the consequences. (Goblet of Fire) 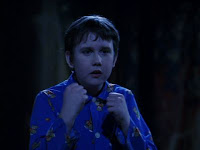 41. Quirrell's true allegiance. After spending the first book thinking that Professor Snape hates Harry - true - and is trying to kill him - false - we discover that ineffectual, timid Professor Quirrell is not only after Harry, not only trying to bring Lord Voldemort back - but Voldemort is living on the back of his head! And Snape is trying to protect Harry. The first, but by no means the last of such twists in this series. (Philosopher's Stone)
40. The Triwizard Tournament. All of it. (Goblet of Fire.)
39. Tonks loves Lupin! Dumbledore's dead, Bill Weasley badly wounded, but his wife-to-be Fleur is sticking by him. I turned the page - and all of a sudden, two of my favourite characters are in love with each other! Where did that come from? (It is foreshadowed in the book, but I did not suspect a thing. Lovely couple.) (Half-Blood Prince)
38. Luna Lovegood's Quidditch commentary. (Half-Blood Prince.)
37. Tom Riddle's true identity. Hands up who saw that coming first time around? (Chamber of Secrets)
36. Umbridge vs McGonagall. "You are raving," said Professor McGonagall, superbly disdainful. Don't try to outsmart McGonagall, Dolores. You will lose. (Order of the Phoenix.)
35. The duelling club. It is testament to how irritating Gilderoy Lockhart is, that I found myself cheering on Snape before I ever liked him as a character. (Chamber of Secrets)

34. First sight of Hogwarts. This really is a magical world. If only my school had been like this. (Philosopher's Stone.)
33. Owl post. You can run and hide, Dursleys, but there's no escaping Harry's magical identity. He will be a wizard, like it or not. (Philosopher's Stone.)
32. The Shrieking Shack. Sirius is an animagus! And Lupin is his friend! And Lupin is a werewolf! And Sirius is innocent! And Ron's pet rat is the real villain! Shock after shock, revelation after revelation, and everything you think you know is turned upside-down. (Prisoner of Azkaban)
31. "I don't think you're a waste of space." ("Coming from Dudley that's like "I love you.") (Deathly Hallows.)
30. Harry, Ron and Hermione battle a troll. In the girls' bathroom. Aged eleven. And survive. There are some things you can;t share without ending up liking each other, and knocking out a twelve-foot mountain troll is one of them. (Philosopher's Stone)

29. Harry's first broomstick ride. Harry stands up to the class bully, disobeying orders and ends up, not expelled as threatened, but the youngest quidditch player for a century. (Philosopher's Stone.)
28. Snape: "Your head is not allowed in Hogsmeade. No part of your body has permission to be in Hogsmeade." (Prisoner of Azkaban)
27.  'I want to fix that in my memory forever,' said Ron, his eyes closed and an uplifted expression on his face. 'Draco Malfoy, the amazing bouncing ferret ...' (Goblet of Fire)

26. That wonderful scene in the Goblet of Fire film, where the kids are talking about Yule Ball partners when they are supposed to be doing homework. Fred's mimed invitation to Angelina is hilarious, but the best part is Snape who, when hitting them with his book proves ineffective, forces their heads forward. It's the twitch of his sleeves that does it for me! (Goblet of Fire, film)
25. The Mirror of Erised, and how it helps Harry outwit Voldemort for the first time. Dumbledore:"It was one of my more brilliant ideas, and between you and me, that's saying something. Only one who wanted to find the Stone - find it, but not use it - would be able to get it, otherwise they'd just see themselves making gold or drinking Elixir of Life. My brain surprises even me sometimes..." (Philosopher's Stone)
24. The Marauder's Map. "I solemnly swear that I am up to no good." Bonus points for insulting Severus Snape. (Prisoner of Azkaban.)

23. Harry under the influence of Felix Felicis, the lucky potion - especially the film. Daniel Radcliffe clearly enjoyed hamming it up in that scene. (Half-Blood Prince)
22. Dobby to the rescue. Though I didn't like Dobby particularly, his rescue of Harry et al from Malfoy Manor is brilliant, and his death scene so sad. (Deathly Hallows)
21. The Seven Potters. Fred and George: "Wow! We're identical!" (Deathly Hallows)
20. Ron and Hermione finally get together. (Deathly Hallows)
19. Snape: "Do you remember me telling you we are practising non-verbal spells, Potter?"

"Yes," said Harry stiffly.
"Yes sir."
"There's no need to call me 'sir', Professor." (Half-Blood Prince)
18. Molly Weasley vs Bellatrix Lestrange, and I quote: "NOT MY DAUGHTER, YOU BITCH!" (Deathly Hallows.)
17. Dumbledore's Army. Despite the best efforts of Dolores Umbridge, a group of students continue practising Defence against the Dark Arts in secret, right under her nose. (Order of the Phoenix)
16. In the Ministry for Magic, we see just why Albus Dumbledore was the only wizard Voldemort ever feared. (Order of the Phoenix)
15. Ron's return and the destruction of the Slytherin Locket. (Deathly Hallows)

14. Platform 9 3/4. Harry's first introduction to the Weasley family, who promptly adopt him as one of their own. (Philosopher's Stone)
13. The Weasley Twins' exit from Hogwarts. They make sure that Umbridge is left with as much chaos as possible, and the staff and students do all they can to help. Best line comes from McGonagall to Peeves the Poltergeist. "It unscrews the other way." (Order of the Phoenix.)
12. "Look... at... me." Severus Snape was never going to survive the series, but his death scene was a shock, so sudden. It seemed a bit anticlimactic on the first reading, but then, with a bit more information, it all makes sense and is so very sad. An addition to the film makes it more obvious. "You have your mother's eyes." *sniffle, sob* (Deathly Hallows.)
11. Neville Longbottom faces Voldemort, survives and kills the Dark Lord's last horcrux, his snake Nagini. (Deathly Hallows)

10. Escape from Gringotts. On a dragon. (Deathly Hallows.)
9. Expecto Patronum! And then it hit him - he understood - he hadn't seen his father - he had seen himself. (Prisoner of Azkaban.)
8."I am not worried, Harry," said Dumbledore, his voice a little stronger despite the freezing water. "I am with you." Throughout this book, Dumbledore has trusted Harry with more and more, treating him as an equal, until their roles are reversed. This is the moment in which Harry comes of age. (Half-Blood Prince)
7. "King's Cross." Harry's near-death experience, in which he meets Dumbledore once more, and finally - finally - understands everything. Dumbledore: "Of course it is happening inside your head, Harry, but why on earth should that mean that it is not real?" (Deathly Hallows)

6. Priori Incantatem: Lord Voldemort has returned, and he will kill Harry Potter. Harry is just fourteen years old, he knows nothing of duelling. He's toast. But he's not giving in without a fight, and with an expelliarmus - the disarming spell and the only useful spell he knows - the two wands connect. (Goblet of Fire)
5. Dumbledore: "Well - it's just that you seem to be labouring under the delusion that I am going to - what is the phrase? - come quietly. I am afraid I am not going to come quietly at all, Cornelius." And sure enough, he does not. (Order of the Phoenix)
4. "The Prince's Tale." After seven books, eight films of keeping us guessing, finally J. K. Rowling's most complex creation reveals his true character, and it is heartbreaking. Excellently acted by Alan Rickman in the film. (Deathly Hallows)
3. The final confrontation between Harry and Voldemort: in which Harry survives - again - the killing curse, and defeats the most evil wizard of all time with nothing more than his favourite disarming spell. The Elder Wand recognises Harry as its true owner, and he becomes the master of death - not by becoming immortal, but by facing his own mortality and being unafraid. (Deathly Hallows)
2. The Boy Who Lived - because his mother loved him enough to die for him. (Philosopher's Stone - recurring theme)
1. Harry's sacrifice. Harry not only looks death in the face, but walks willingly towards his fate, his companions all those he has loved and lost, giving him the courage to do what must otherwise be impossible. Beautiful, beautiful scene, wonderfully written and perfectly adapted. It will give you the chills. (Deathly Hallows.)
Posted by Katie Edwards at 19:25