There are some stories that don’t wear out, and the Robin Hood legend is possibly one of the most popular. Today I’m going to share my thoughts on just a few of the screen adaptations: good, bad and ugly. 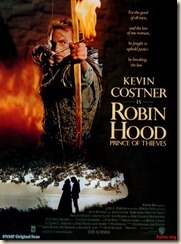 My goodness, this film is cheesy! Was it supposed to be, I wonder? There seems to be a strange balance between an epic score, a rather melodramatic script being acted by some actors who seem to take their roles very seriously, alongside BRIAN BLESSED (albeit in a tiny role) and Alan Rickman hamming it up as the deliciously evil Sheriff of Nottingham.


“LOCKSLEY! I’M GOING TO CUT YOUR HEART OUT WITH A SPOON!!!”

And let’s not even get started on the accents. (I’ll leave that job up to Mel Brooks and Cary Elwes, see below.) I’m not quite sure of its reception when it first came out, and I’m sure the first time I saw it, when I was a kid of about 11, I found it pretty grim viewing. I don’t even remember watching very far into it, put off by the horrors of the prisons where the story begins. If I’d seen a bit more of Rickman, perhaps I’d have changed my mind somewhat; he is an absolute joy to watch. The film as a whole is all good fun, using some of the best-known traditions of the legend, and helping to cement newer plot additions into the Robin Hood canon, but somehow it seems as though this film isn’t quite sure whether it wants to be adventurous and gritty, or tongue-in-cheek. Maybe it was always a little confused, maybe it hasn’t aged very gracefully, or perhaps I’ve been ruined forever by watching the hilarious Mel Brooks parody Robin Hood: Men in Tights, which just highlighted all that was ridiculous about Prince of Thieves. 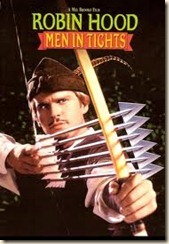 “Unlike some other Robin Hoods, I can speak with an English accent!”

If Prince of Thieves is a little confused about what genre it is, Men in Tights has no such troubles. A slapstickish comedy full of bad puns, deliberate anachronisms and the complete destruction of the Fourth Wall, somehow Men in Tights is closer to what I think of as the “real” Robin Hood story than the film it is most directly taking the mickey out of. Cary Elwes – “Westley” from the cult classic film The Princess Bride – smirks his way through scenes very reminiscent of Prince of Thieves, with Robin’s escape from prison in Jerusalem (swimming home to the tune of “Row, row, row your boat, kissing the sand, and promptly spitting it out again!) and his tragic homecoming.

Then, of course there is the ghastly concoction brewed up by the hideous Latrine, while she tells Prince John all she knows about Robin of Locksley. (“You want certain, hire yourself a witch! I’m just your cook.”) This whole film ensures that I can no longer take Prince of Thieves seriously at all, though there are moments taken from other versions of the tale, such as the trap to catch Robin by luring him to an archery tournament, Prince John’s presence, and of course the green tights. 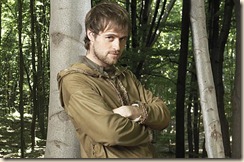 After the first few episodes of what has become known as “Robin Hoodie” due to its costume choice, I wrote this review:


All right, there is no way that this series can be taken seriously, but it is enjoyable enough to allow me to suspend my disbelief. The cheese factor is bearable, though I could not believe the cheek of some of the lines: "I am your father;" "I shot the sheriff..." "No, you shot the deputy" to name just a couple. Minghella et al have plagiarised shamelessly, but in a tongue-in-cheek way. However, it is left to the supporting characters to give the programme the charisma it needs: what is with Robin Hood being reincarnated as an emo pacifist? Sam Troughton as Much is adorable and grows as a character through the series. Keith Allen hams it up as the Sheriff of Nottingham, and let's not forget Richard Armitage as the brooding villain with a bit of a heart. Marion is gorgeous and manages to avoid the stereotypes that are a danger for females in adventure stories: she is neither a doormat who spends her time working on her embroidery, nor a man's character in a dress, but a strong, feminine woman trapped in a seemingly impossible situation.
I look forward to series two, but I hope for some more bow action and less sulking from Robin next time around.

Perhaps it was Isle of Wight loyalty – the man behind this reinvention of the Robin Hood legend was the brother of the late Anthony Minghella. Looking back now, I feel I was too generous – especially after the plot developments of seasons two and three. There is something wrong when you’re secretly hoping that Guy of Gisbourne will polish off Robin Hood in any confrontation! And this is the version where the writers decided it was a good idea to kill off Maid Marian and introduce their own potential love interest character in her place. It wasn’t a good idea, and by all accounts Maid Marian’s replacement was what fanfiction writers dismiss as a “Mary Sue.” I say “by all accounts” because after series one I only dipped in and out of this series. Even in the first season, most of my enjoyment of this programme came from shouting abuse at the TV screen at either the corny scripts or the actions of our designated heroes, such as Robin failing to follow through on his threats, and generally wimping about. 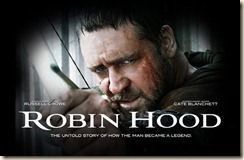 Despite, or perhaps because of, my love for the Robin Hood legend, I never went to see the latest film in the cinemas, from Ridley Scott and starring Russell Crowe. By all accounts it was a “darker, grittier” retelling of the legend, and the fact that these two were the pairing for Gladiator, which I disliked, made me suspicious. But was it darker? Well, yes, the light was poor in the opening scene, and there’s a fair bit of blood. But I was hasty to judge.

Over the past century, the Robin Hood tale has evolved, each filmmaker adding new elements to the legend, which the next assumes has always been there, and so the story has mutated. Of course, this has always been the case – the tale has been changing since the early ballads, the old folk plays, literature – Ivanhoe – then later film and television. Ridley Scott has taken the story back a bit, so that the basic plot points remain recognisable, but the details are different.

Lady Marion is older and more worldly than usual,  no longer “Maid,” but widow of Sir Robert Locksley – who is not Robin Hood. The man we know by that name is a humble archer who, for tax reasons, has taken on the identity of Locksley. This version takes place at the very end of King Richard Coeur de Lion’s life – he dies early on – and the wicked Prince John of legend is now the wicked King John by rights. This story is set against the backdrop of treachery and the threat of invasion from France, and turns into a war film, concluding with Robin Hood being declared outlaw – which is where most stories pick up.

But despite the differences, I thought that this film had a greater Robin Hood feel to it than some of the aforementioned, with a good historical setting – though I am quite sure many liberties have been taken with accuracy. And if Russell Crowe’s accent takes a bit of a wander around the British Isles and beyond, at least he tries, bless him. *ahemKevinCostnerahem* 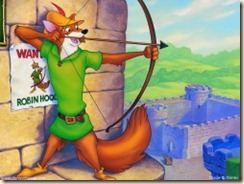 I suspect that a lot of what I’ve referred to throughout this post as the “familiar” Robin Hood story comes from the Disney classic, which stars a strange mixture of anthropomorphic animals with a strange mixture of accents. Historically, geographically or realistically accurate, this is not – talking animals aside. But no matter. It’s a kids’ version, an introduction to the old tales whose only purpose is to tell a good story. And, after all, we are told right from the start that this is the animals’ version of the legends of old, not the British version, or even the human version. So I have no problem accepting a wolf who plays the kind of Sheriff you’d find in an old Western, rather than in medieval Naadinghayem – sorry, Nottingham, or a Friar Tuck who I didn’t even realise was supposed to be a badger, even though it says so in the credits. It doesn’t matter. It’s all good fun, though things take a sombre turn and I confess the song, “Not in Nottingham,” which is sung when our heroes are at their lowest point, still makes me feel a little choked up.

Other notable adaptations include: