Sorry for the sparsity of book reviews at the blog recently. After the thrill of getting really immersed into the Harry Potter world once more, reading one book after another, I've taken my reading a bit slower than usual, as well as reading many books at once - and subsequently taking longer to finish any one. 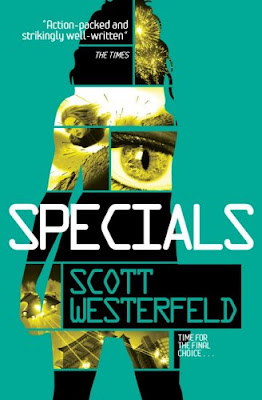 If you come to Specials after reading the prequel books, Uglies and Pretties, you'll probably have a good idea of the patterns the story takes. It starts off, some time after Tally Youngblood and her friend Shay have had yet more operations to make them "Special:" Employed as government agents and set to crushing the rebellions among the ordinary Pretty folk, Tally and Shay have had their faces redesigned to intimidate the "bubbleheaded" pretties, senses finely-tuned to track and outsmart miscreants, and radio antennae implanted into their skin so they can communicate from afar. Their minds are made coldly logical, and their personalities rewritten once more to incorporate a large dose of arrogance. As far as Tally's concerned, this is the way things are supposed to be, until a reminder from her past sets her questioning her world once more.

Like Pretties, it is frustrating to read Tally's thought processes from the outside - when you know how she is brainwashed and manipulated into working for a crazy totalitatian government. With her new personality traits, I found myself actually disliking Tally this time around - even though I knew this wasn't really her. But the story begs the question: when her mind has been so meddled with, what is her real personality? Is it how she used to be, or what she seems to be now? It was interesting to see the dystopian world from other side; the point of view of those who not only support but enforce it, so that everyone can live in peace and order, and that individuality and personal freedom are a small price to pay for such a world.

Westerfeld also raises the questions of what it is to be human. What started off as a little bit of meddling - cosmetic surgery to make everyone look a certain standard of "pretty" - requires more and more meddling to keep under control. "Pretties" need brain surgery to prevent them thinking too hard about the ethics of the process, and then there need to be Special Circumstance agents to keep control, who need to be rewired in another way. As a Special, Tally finds herself repulsed by her former boyfriend Zane, because although he is "pretty," he is just the same as everyone else. All are equal, but some are more equal than others.

Despite the ethical questions, I found myself skimming through chunks of Specials, losing interest as the story seemed to repeat the same patterns as the first two volumes, saturated with technobabble I couldn't really visualise. It picked up towards the end, when Tally reached the "New Smoke," the city of Diego, where she finds that her very existence is questioned in its legality, and is faced with the dilemma of how to proceed in the upcoming war between Dr Cable's neatly-ordered Pretty city, and the New Smoke. I was surprised by the ending, and impressed that Westerfeld did not go for the easy or obvious ending, but I am in no great hurry to read the companion novel Extras. All in all, I think the Uglies story had potential, but that it was dragged out too long.
Posted by Katie Edwards at 20:34