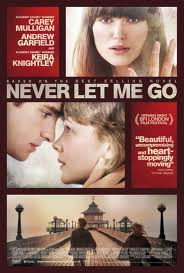 I read the novel Never Let Me Go by Kazuo Ishiguro just before the film was released and all the publicity was coming out. As it happened, I was non-stop busy when the film hit the cinemas, and had to leave it a couple of weeks. That's OK, I thought, I can see it later - except it had left the cinema within about two weeks! After all the publicity, and the casting of Keira Knightley and Carey Mulligan, I had expected it to be much more popular. But now the film's on DVD I've been able to rent it from Blockbuster to see how it translates to the screen.

Kathy (Mulligan), Ruth (Knightley) and Tommy (Andrew Garfield) grew up at Hailsham school, a seemingly ordinary English boarding school, but one that when examined closely, seems a little odd. The children of Hailsham are being raised for a very specific purpose, which is revealed to them gradually, before they are too old to quite understand, until they are grown up knowing everything which is too deeply ingrained in them for them to expect any other life.

It's not very easy to compare the reading experience of Never Let Me Go with watching the film. There can only be one first time, and to watch the film knowing what is to come makes seemingly insignificant little scenes become heartbreaking. To me, it seemed that the Big Reveal was made more obvious in the film, but perhaps that was because I already knew it. It also seemed to come a lot earlier. The book seemed to dwell on the Hailsham years for a lot longer, but it might be that I was just reading it slowly. 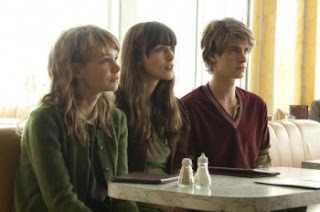 The film certainly emphasised the not-quite-rightness of Hailsham in a more definite way than the book. When I read things that seemed a little out of place, I couldn't be sure if it was my interpretation of Ishiguro's choice of language that made things seem skewed, or if they really were. The book is narrated by Kathy H, which gives the reader a personal view of the story from within. Although Kathy narrates part of the film too, the visual medium distanced me and made me see the friends' situation as an outsider. The new  Hailsham Guardian, Miss Lucy (Sally Hawkins), is a more relatable character, as she comes to Hailsham as an adult and is plunged into a situation that doesn't seem natural to her, whereas the children know no other life.

The Hailsham students, even as grown-ups, are visibly different from people of the outside world. Even after leaving school, they are isolated, living in shared accommodation with other people "like them." Their attempts to act like "outsiders" are amusing but pitiful - copying cheesy American sitcom characters because they know no other way to relate, and sitting stiffly in a cafe, too afraid and overwhelmed even to know how to order lunch. These are clearly outsiders, conditioned for plot reasons to be different from non-Hailsham people, and yet it's nurture, not nature, that makes them so. 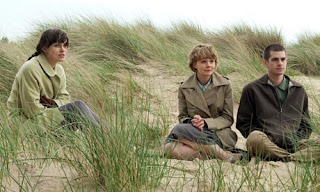 The tone of the book is subdued, pensive and moody, and the film turns this right up with the help of the sad, eerie soundtrack, the characters' drab costumes and unexcitable acting. The literary cushion is stripped away and the film really drove home the passivity of the characters. Most books set in this sort of world show the fighters, those who rebel against their lot. But not everyone is a revolutionary, and Never Let Me Go's central trio are those ordinary people who have no thoughts that life could be any different. It's a bleak world, and what is thoughtfully melancholy in the book is shown up as plain depressing here.

I'm glad I got to see this film - finally! - but I think it works better as a companion to the book than viewed on its own. Alone, it is too harsh and leaves rather an unpleasant aftertaste. Kathy ends by pondering about how everybody dies (or "completes") wondering if life could have given them more, thinking they've missed something and been left unfinished, and that was the feeling I got from the film. I don't think anything too important was omitted, but the movie wasn't quite satisfying. I felt there ought to be more - but what?
Posted by Katie Edwards at 18:20