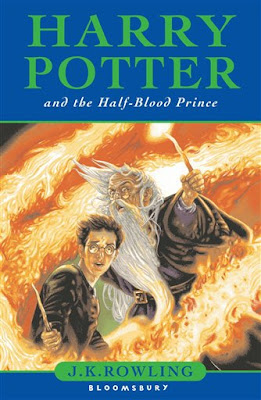 After the stifling atmosphere of the last book, it comes as a relief to be reintroduced into the familiar, friendlier Hogwarts. Yes, the wizarding world has become a dark, dangerous place. Voldemort and his folllowers are at large and in the open, and every edition of the Daily Prophet newspaper reports more death and devastation. Even the Muggles know something strange is going on. But at least the threat is in the open. Harry and Dumbledore don't have to deal with the Ministry's opposition to their every move and wild accusations - on the contrary, the Ministry want to be best buddies. It would make them look good, because rumour has it that Harry Potter is the Chosen One destined to destroy Voldemort.

Before this book was published, it had been publicised, like the last two volumes, as being darker than ever. But, for the majority of the book, this is a return to a tone that was more reminiscent of the first half of the series. Harry, Ron and Hermione are now sixteen and a great deal of the plot focuses in on their muddled attempts at romance. There also seems to be a lot more humour, even among the dark events going on outside Hogwarts - and within, if Harry's suspicions about two of his oldest adversaries are correct.
Thankfully, Harry has grown out of the rage that was the defining point of his character in Order of the Phoenix! Professor Dumbledore plays a greater role, as he and Harry work together out of school hours, seeking the information and means to defeat Lord Voldemort once and for all. Through flashbacks, Harry learns a lot about Voldemort's backstory, from his parentage, to his childhood and adulthood, before his rise to power as the most feared wizard of all time. I found Half-Blood Prince an easier book to get through, not as emotionally taxing - and frustrating! - as its predecessor with the lack of Umbridge. There is a good balance between lessons, mystery, humour and exposition, with some significant development of some of the best-loved characters.

And then, right at the end, comes an abrupt change in tone, in the most disturbing scene of the entire series, the Cave Scene. The book comes to an end with a series of climactic events that mean that nothing can ever be the same again.

If somehow you have got through the book publication in 2005, and the film release in 2009, and still don't know what happens, be warned that plot and character spoilers follow:

While Harry has shown himself as growing in maturity throughout the book, with the increased responsibility allotted to him by Dumbledore, and in his own actions, the cave scene marks Harry's coming of age. Early in Half-Blood Prince, Dumbledore tells Harry:


"I do not think you need worry about being attacked tonight."

At the time, it seems like a typical Dumbledore thing to say, a quirky but reassuring lack of false modesty - after all, Dumbledore is the greatest Wizard alive at this point. So it's a testament to how far Harry has come, when Dumbledore says, after a terrifying ordeal that reverses his and Harry's roles,

But it is not Harry's characterisation that is so fascinating as Severus Snape's. We've known since the end of Goblet of Fire that he has been a Death Eater, and that he is assuming his former role, acting undercover for Dumbledore. And he is doing a very good job. To fool either Dumbledore or Lord Voldemort would be unthinkable - but Snape is fooling one of them. But which one? All the evidence in this book paints him in a very suspicious light indeed, making an Unbreakable Vow to commit some unnamed act for Voldemort, arguing with Dumbledore and trying to back out of a deal with him, and offering assistance to the very dodgy-acting Draco Malfoy. But Dumbledore trusted Snape, and I couldn't bear to think Dumbledore could be wrong. What sort of message was that to give the kids? Besides, Snape has always been the most complex person in the story, an ally but completely unpleasant! To make him a villain after all would surely diminish him as a character. But sneaky Ms Rowling gave plenty of evidence to support either argument - Snape as villain or Snape as hero - but no definite proof either way.

Until the end, when Snape proves his true colours beyond all doubt.

I read the last chapters in disbelief, desperate for some revelation to prove that somehow, something wasn't as it appeared. I read on, and I read on, and at last I came to the understanding that I must have been mistaken, that there could be no coming back from what he had done. But still it bothered me. Surely there must be more to this man than meets the eye?
Posted by Katie Edwards at 00:19