Pottermania has been abounding in the last couple of weeks with the run-up to the final film in the series, which premiered in London on Thursday. I watched some of the live coverage, and when Alan Rickman turned up, I couldn't help singing, "Snape, Snape, Severus Snape!" from the Potter Puppet Pals online video, "A Mysterious Ticking Noise," and the tune which has popped into my head as a sort of leitmotif for Snape whenever he turned up in the books. So I nearly fell off my chair when, a couple of seconds later, I could make out what the crowd were chanting.

So, I may or may not have been persuaded to go along to the midnight showing of the final film on Thursday night/Friday morning. I've never been one for midnight anything. I'm too fond of my sleep. Instead of visibly succumbing to the Pottermania with the book releases and queuing at the bookshops, I got up early to buy my copy. But this is my last chance. It remains to be seen whether I might dress up... Expect a Movie Monday review next week.

In a way, I envy the next generation of kids. With Pottermania so strong over the last few years, I doubt there are many people who haven't read the books, seen the films or at least had important parts of the story told to them. When the fuss has begun to die down, and a new readership comes along, I envy them the opportunity to read the books unspoiled, not knowing what to expect, like (most of) my experience. But just in case there are readers who don't yet know the whole story, be warned: After six books whose major events fit into a neat little routine - Something slightly odd happening in the school holidays, a return to school, slow revelation that something odder is taking place in or out of the school, several mysteries to solve throughout the year building to a climax just before the summer holidays - Harry Potter and the Deathly Hallows breaks the pattern by not sending Harry, Ron and Hermione back to Hogwarts at all. Instead, the trio set out on their own to search for and destroy He Who Must Not Be Named's horcruxes - a collection of objects to which the Dark Lord has attached portions of his soul in his search for immortality. Considering that Harry has only the vaguest idea of what these objects might be, and no clue where in the country - or the world! - You-Know-Who has hidden them or how to destroy them, this is no easy feat. 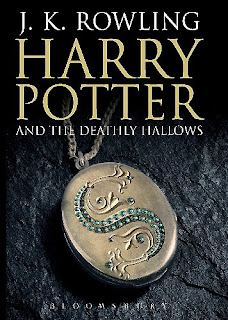 Sometimes, in fantasy quests, the world seems very small indeed, and the near-impossible achievable with unrealistic efforts. This is averted in most of Deathly Hallows, which portrays the tensions that rise when three people are living in close quarters, away from the rest of civilisation, embarking on a hopeless quest - especially when they have as a companion a little piece of the most evil wizard of all time, shut into a locket. in addition, because the trio are no longer at school, the plot no longer has to fit into a single academic year. It does, but it's equally possible that it could take years.

After a brief respite in Half-Blood Prince, the Ministry of Magic stands once more against Harry, this time because of its being infiltrated by You-Know-Who's Death Eaters who are terrifying the rest of the ministry into submission through threat and force. Thankfully, as Harry and co spend much of the book out of contact with other wizards, the sense of oppression is less intrusive, and though we do see the horrible Umbridge again, she plays a much smaller part. 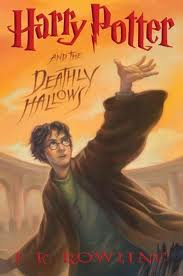 Although Deathly Hallows is exactly the same length as its predecessor, it feels like many books in one, with more action, more varied scene changes as the heroes apparate across the country, visiting friends, London, forests in the middle of nowhere, wizarding settlements, more middle-of-nowhere, wizarding businesses, being captured and escaping and eventually winding up back at Hogwarts school after all. Add to this Harry's visions back in and out of Voldemort's mind, and I wonder how this much story can be packed into just over 600 pages. No wonder Warner Brothers chose to make this story into two films instead of just one.

As if this weren't enough, we find out a lot more about Albus Dumbledore's youth, where it is revealed that the wise old wizard was not so infallible as we'd previously been led to believe. Indeed, the man had spent his whole life trying to atone for a tragic mistake from his youth. And at last, the true character of one of children's literature's most complex anti-heroes is revealed: the enigmatic Severus Snape. 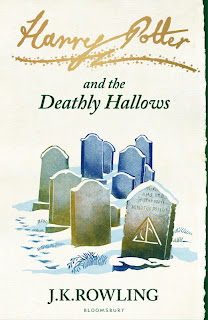 I stand in awe of J. K. Rowling's storytelling, for Harry Potter's story is made from so many strands of plot and subplot, but Rowling does not lose a single thread, weaving them together perfectly in this finally installment. Everything is significant, nothing is left dangling, Rowling is truly the master of her craft. The saga culminates in an epic battle at Hogwarts which is a bit of a family reunion, reintroducing forgotten faces and old favourites. But it is rather a bloodbath! We are forced to bid farewell to some beloved characters, for in war, no one is guaranteed immunity. There were two characters, just two, that I thought were safe (and neither of them were Harry.) I was proven wrong, and it is just one cruel, devastating loss.

If the Horcrux quest seemed a little too conveniently resolved, and if the wand-politics at the end are confusing, these are small criticisms when compared to the rest of the finale. The final showdowns - for there is more than one - are poignant, beautifully written and epic, and a couple of unexpected characters get moments which I fully expect to raise a cheer in the cinemas. Harry Potter and the Deathly Hallows is an utterly satisfying conclusion to this wonderful series that has captured the hearts and imaginations of children of all ages. While rereading the series, I have been fully absorbed both while reading it and when I was not, and it's strange to have finished it now. Roll on Thursday midnight!