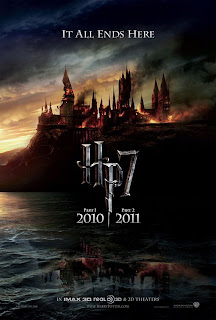 With the final installment of the Harry Potter film series released this Friday, it is only right that this week's Movie Monday brings us up-to-date with the story so far. I'm not going to recap the story here, as I've written fairly lengthy book reviews already. The film itself makes no allowances for newcomers - it's probably a safe assumption that most viewers know what's going to happen anyway, and that those who don't, have at least watched the films to date. After a brief speech from the Minister for Magic, we are plunged without any further ado into the seventeen-year-old heroes' lives as they prepare to leave their homes and venture out into a terrifying world unprotected. This is the only film to reduce me to a blubbering wreck in the first two minutes, before the title card.

As I said, this film is not very newbie-friendly, reuniting Harry and the audience with a flurry of old faces, some not seen for three or more films (Fleur, Dobby) and other characters are introduced briefly, with little to-do, and you are left to work out for yourself quite where they all fit into the equation (Bill Weasley, Mundungus Fletcher and others.) Still, I was very pleased to be introduced to the eldest Weasley boy, a tertiary character for whom I have quite a fondness, but who could conceivably have been rewritten. When I first heard that Deathly Hallows was to be split into two films, I wondered whether it was strictly necessary, but now I am very grateful for the fact. This is probably the most faithful adaptation since Chamber of Secrets, but is a far superior film, in part because the actors have come a long way, in part because there was enough imagination in the translation process from one medium to another. When reading the book, there were a couple of subplots I hadn't remembered being included in the film, but there was enough to suggest that these have not been forgotten, just probably shuffled into part 2. Just a few more days and I will know. 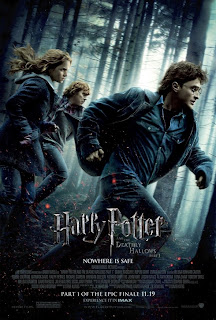 The previous film, Harry Potter and the Half-Blood Prince opened with a shot of the Millennium Bridge being destroyed, showing how even the muggle world was affected by the wizards' wars. Deathly Hallows Part 1 shows the continued effect, which I found the more chilling because it was more casual: a headline announcing the murder of a muggle family, the battle between the Order of the Phoenix and the Death Eaters - and Voldemort - taking place over a busy motorway and bringing down power lines,  the burnt-out caravans in the scenery without any mention of what happened.

After about half a film full of fantasy action: a discovery, the infiltration of the Ministry of Magic - but alas, no one answered my plea to assassinate Umbridge after her first giggle -  and a One Ring-like Horcrux spreading  discord between the central trio, more terror comes after a moving scene at Harry's parents' grave, when Harry and Hermione - Ron having temporarily scarpered in a huff - meet what they think is magical historian Bathilda Bagshot. Background music and the preknowledge of what is to come, but not how, build up a creepy suspense, and the gruesome horror is more implied than shown, with the buzzing in the background and a few blood spatters. There is a strange moment when, after the scenes in a gloomy old house, the wall is smashed open to reveal a bright, airy nursery for a moment or two, before returning to darkness. This uncanny, unexpected shot just heighten the chaos and panic of the scene. 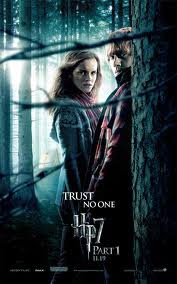 In Chamber of Secrets, when Harry discovers that he can speak the language of the snakes - without realising it! - the filmmakers were left with a dilemma: do they show the scenes as Harry sees them - implying he speaks English and then revealing that wasn't the case at all - or as they really are - alerting the audience to his uncommon skills before Harry himself finds out. They went with the latter option, and I remember thinking "that ruined it!" Somehow, this time - at least on this viewing - I thought they did a better job. It seemed that "Bathilda" was saying something I couldn't quite make out, but somehow it seemed like it wasn't clear why, whether my ears or brain weren't working properly for a moment. But maybe that was just me and just this time.

The Harry Potter actors and filmmakers have come a long way since the twinkly, magical children's film that was Philosopher's Stone, and particular credit goes to the central trio, who must have spent half their lives so far playing these roles. Emma Watson as Hermione deserves a particular mention in this film; it was thanks to her performance that I was reaching for the tissues in the first two minutes.

Oh, and of course Dobby, not seen since Chamber of Secrets, and generally disliked then, Dobby put a smile on my face when he reappeared in all his joy to see Harry Potter, his pride at being A Free Elf and general cheerful, matter-of-fact demeanor in a film so full of darkness and fear. Of course, this makes his final scenes all the more heartrending. I never would have thought nine years ago that I would shed a tear for that irritating house-elf!


I've now bought my ticket for the midnight showing - ten past midnight, if that makes any difference! - of part 2 on Thursday night/ Friday morning, and am itching to see the final part. Reading all of the books in a row recently has left me more caught up in the Pottermania than I otherwise would be, and I am particularly looking forward to seeing Neville and Mrs Weasley's greatest moments, Alan Rickman as Snape - a character sadly missing from most of the previous film - and his backstory, and of course the final showdown(s) between Harry and Voldemort. But I am in no doubt about the fact that tissues will be needed.
Posted by Katie Edwards at 22:37