For several years now, I've had a troubling vision of a future where the physical world is entirely forsaken in favour of twenty-four-hour internet. Where there are no shops, only online shopping, no human interaction but continual tweeting, no social gatherings but Facebook events. Where relationship status updates carry more weight that marriage certificates, and where couples don't even need to be in the same country. Instead of living life, we livetweet, and instead of seeing the world, we photograph it and post it on Instagram. We shun the friends we are with, while exchanging tweets on our smartphones with someone the other side of the world. And as I write this, I wonder how much of this is prediction and how much observation. I'm certainly as guilty as anyone else. The other day I could not be bothered to cook, so I ordered pizza without any human contact except, briefly, with the delivery boy. To this geeky, socially awkward blogger who loves escapism, there is a certain appeal to such a lifestyle, yet its very appeal sets off warning bells in my head. How long before we routinely upload our brains into the internet? 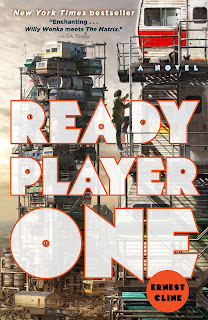 With Ready Player One, Ernest Cline makes a far better job of portraying such a world than I possibly could. In the not-too-distance future, the internet has been swallowed up by a massive, sprawling virtual reality called the OASIS. More than just a video game, the OASIS spans universes, with planets, books, virtual schools and workplaces, shops and restaurants, and of course games galore. Users have an avatar to traverse the OASIS, with headsets and gloves that allow them to experience the virtual worlds as though physically present. A few years before the novel begins, James Halliday, the OASIS' designer died without an heir, and his multi-billion dollar fortune has been left to whoever is first to unravel the clues hidden within the virtual worlds. For a long time, the clues yielded no results, and by many the "Easter egg hunt" has been dismissed as a hoax. Until eighteen-year-old Wade Watts stumbles upon the first key...

I've never been much of a gamer, and so it took me a long time to be persuaded to read this book that has had such rave reviews. I needn't have worried: it was wonderful. Both the story and the world of the OASIS were utterly engrossing, and I would forget that I was reading about a kid sitting in the remains of a car in a junkyard, plugged into his computer. The OASIS seems more real than Wade's reality, which is in a sad state of being: overpopulated with all the world's resources running low. There's no real future for a kid who lives in a stacked trailer park. No wonder he finds refuge plugged into the internet, where he can be whoever he wants. Problems in the OASIS seem to affect Wade more than real-world catastrophe, and at times it would take me a moment to get reality and OASIS untangled. The OASIS, a computer programme made entirely of 0s and 1s, is as convincing a setting as any.

One of my favourite things in fiction is a good treasure hunt; not that I'm ever any good at solving the clues, but I enjoy watching the characters work them out. The hunt for Halliday's fortune lies in geek culture, especially from the 1980s: in science fiction, early computer games and cult movies. Though many of the references passed me by, many more made me smile - Firefly, Hitchhiker's Guide to the Galaxy, Discworld, Star Trek, Doctor Who... all these are name-dropped, and I had a big goofy grin all over my face through the final test. (Clue: he's using coconuts!)

Ready Player One is as thrilling as the best computer games, with enough real-world peril to keep the reader really caring. Solving the clues is more than just about winning the money: once the first key is uncovered, the big corporations get involved, their ultimate goal to privatise the OASIS. This is not just a case of Yahoo buying Tumblr, or even Amazon taking over Goodreads. For underprivileged kids like Wade, the OASIS is what makes life worthwhile. And the corporation plays nasty. Wade and the other competitors pose a threat to their ruthless ambitions, and must be stopped by any means.

I could not get enough of this novel, and it came as a real shock to reach the end. An outstanding science fiction novel: engrossing, geeky and a lot of fun. I wanted to eat that book.