One of the problems of working in retail is that you spend so long knowing that it's "nearly Christmas" in shop terms from September onwards, that you don't really believe it. Then December hits and you're just about getting in the mood and then it's over. Well, this year, I've started feeling like it really is coming up for Christmas... because I've got a cold. Unfortunately, since I've been in this job, Christmas and colds seem to go hand-in-hand. I've lost my voice. It must be Christmas! I was actually glad to get ill this week, because it means I'll be better by Christmas day and be able to really enjoy the festivities. It has, however, been an interesting experience trying to communicate with customers in a busy shop when I can barely speak above a whisper. Yesterday, I was seriously tempted to hold up cards with questions like: "Do you need a bag?" on them.

I didn't write a Sunday Summary last week because I went to visit my sister in London, where I got a lot of my Christmas shopping done - hurrah! I managed to restrain myself in Foyles bookshop, only emerging with one book for myself, and that because I hadn't brought enough to read on the train. I came away with Mr Penumbra's 24-Hour Bookstore, which I remembered reading about Ellie and Hanna fighting over on one of their epic shopping trips.

It was good to get away from the Island for a few days - it can get a bit claustrophobic living there. Visiting London for Christmas shopping also made me appreciate how comparatively quiet even the busiest times of year are in my little town. I met up with one of my best friends, Clare, in Kingston, where we had breakfast and wandered around the shops for a bit. Then, with half an hour to kill before I had to catch the train, we made the mistake of going into the Oxfam bookshop. Did I say I was restrained? Well, I was up until that last shop. Oops. 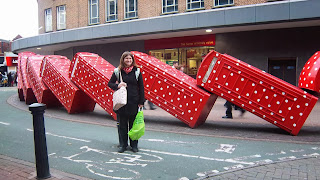 The green bag I'm holding contains 3 books (because once you make up your mind to buy one book, you lose all self-control and find yourself taking home any other book that catches your eye.) In Oxfam I found a hardback called The Explorer Gene, a biography of three generations of the same family who, in different ways, boldly went where no man had gone before. (Sorry not sorry. The family name is Piccard. I was most disappointed that there was no use of that tagline, when writing about the first man to fly in a balloon into the stratosphere, the first man to dive deepest in the ocean, and the first man to balloon non-stop around the world. Perhaps it was too obvious.) I picked up a paperback of 2001: A Space Odyssey, which I've read already this year, but which reawakened my childhood interest in space travel, and finally, a Neil Gaiman book I've never read before, a collaboration with Michael Reaves called Interworld. 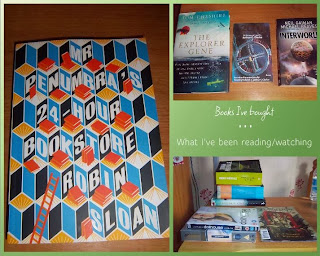 Last week was my last holiday before Christmas, and I spent a lot of the time reading. As well as The Night Strangers which I reviewed here, I read Cecelia Ahern's latest novel, How To Fall In Love. I'm not much of a chick-lit fan, but I do enjoy Ahern's books; they are girly and sweet, but have more to them than just romance, shoes and shopping. They are a cosy read on a cold and grey winter's day. I've started rereading Harry Potter and the Goblet of Fire, and once more enjoying discovering the parts of the story I'd forgotten. The Quidditch World Cup is the first time you see much of the Wizarding community outside Hogwarts, and is always a lot of fun to read - until it all turns nasty.

My train-reading was Al Ewing's The Fictional Man, which I promise I will review during the next week. It's set in a world where fictional characters can be brought to life with cloning technology, and is a fascinating study of stories and humanity, the lines between fiction and reality and whether
they are as clear as you might think, about prejudice and the art of adapting a story from one medium to another. It is engrossing and hilariously funny; I embarrassed myself a couple of times laughing out loud on the train, or talking to the book at plot twists. In Forbidden Planet in Southampton, I picked up the first of Neil Gaiman's Sandman prequel. I confess I prefer reading comics when they are combined into graphic novel format - the adverts are annoying.

I've watched some more Star Trek: The Next Generation, though it hasn't hooked me as much as the original series, and though I like Wil Wheaton as an adult, his character Wesley is every bit as insufferable as I'd been warned: the know-it-all kid who is just so misunderstood but saves the day. It is an interesting change to have crew members' families aboard the Enterprise, but I don't like it. Most unprofessional. I also re-watched the first season of Dollhouse, and noticed a lot more in it the second time around. It was a lot easier to follow the clues when you know the twists they are leading up to. 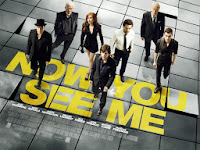 My sister showed me Now You See Me, a film about a team of magicians who use illusion and trickery to commit massive crimes, shown through the eyes of the detective who is trying to stop them. A brilliant, gripping thriller that'll keep you guessing. I predicted the twist at the end, but I didn't really believe it: "It could be anything but this, therefore it probably is this." I'd be interested to watch it again and see what I missed that was staring me right in the face, because I know of at least one thing that was hidden in plain sight, but which I did not see because my attention was misdirected. Very clever film.

I finally went to see The Hunger Games: Catching Fire, which I enjoyed better than the first, probably because, though I had read the book, the story was not so fresh in my mind that I knew exactly what was going to happen and in which order. I think that is the best way for me to watch
films based on books I love, so that I'm not constantly comparing them. Because I'd been out of the world of Panem since the last film was released, I expected to watch it with a degree of detachment, but I found myself in tears very early on, when Katniss and Peeta visited District 11 on their Victory tour. Jennifer Lawrence was naturally amazing as Katniss (though her expression in a certain lift scene was pure Jennifer, and it was wonderful.) I wasn't convinced by President Snow in the first film, but this time I found him utterly chilling. My new favourite character was Johanna. I loved her in the book, and she was brought to life perfectly by Jena Malone. Again, there is a full review still to come.

This coming week I'll be participating in Dana and Jenny's End of Year Reading Cram read-a-thon, which I am very much looking forward to. I've stocked up on chocolate oranges, Pringles (sour cream and onion) mini stollen bites and mince pies to keep me company, because what is a read-a-thon without snacks? This week my aim is to finish Harry Potter and the Goblet of Fire and The Explorer Gene, as well as to get stuck into China Mieville's Perdido Street Station. I'm doing a readalong of the latter with my best friend Judith; it is a fantasy novel quite unlike any other, dark and a little bit steampunkish, and instead of being set in a world peopled with the same old elves, dwarves and wizards (or elves, dwarves and wizards under different names,) Mieville has created a completely new world in the city of New Crobuzon. So far I've only read part one of eight, but I'm already hooked. Finally, I'd like to read something Christmassy, probably a reread of an old favourite, such as The Lion, the Witch and the Wardrobe or A Christmas Carol. What are your reading plans for the week? Do you have any must-read Christmas books, either old favourites or new discoveries?
Posted by Katie Edwards at 13:21