Another month is over, and June has been a satisfyingly bookish month for me. We're in a heatwave in the UK at the moment, and it's uncomfortably hot at work (the air conditioning has broken in its classic timely fashion) so I'm spending as much of my free time as I can on the beach with a book. Last month I was working a lot, but I had a couple of days off to go up to London for a weekend. I met up with the lovely Bex around the time of her birthday, and met her family. Of course we did a little book shopping in Canterbury - although I only bought one book with her: Harriet the Spy, which I vividly remember reading as a kid, but not one I ever owned. However, I also came home with two more full-sized books, and a handful of the 80p Little Black Classics from Penguin. I've also paid a few visits to the labyrinthine Ryde Bookshop and the petite, vaguely Black-Books-esque (but only in the best way) treasure-trove that is Babushka Books in Shanklin. 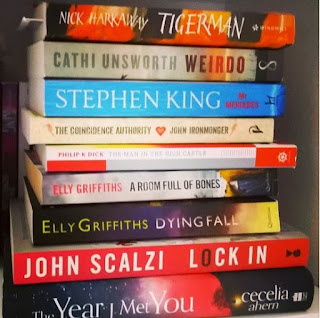 Other Books Read in June

For the first half of July I've planned to take time away from my own to-read shelf in order to get through my library books, borrowed books and gifts, the ones that "don't count" as part of my "read-three-buy-two" rule. I'm giving myself until the 13th to get through as many of the following titles as possible. The 14th, of course, sees the publication of Harper Lee's very long-awaited second novel, Go Set a Watchman (or first - I believe it was written before To Kill a Mockingbird.) I have my copy pre-ordered and will want to read it as soon as it becomes available. 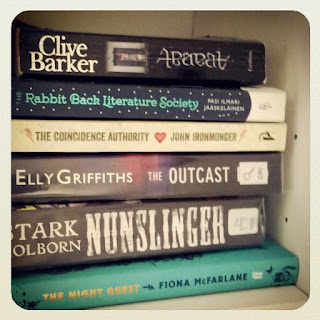 Have you read any of these books? Any recommendations on where to start?  Here's wishing you all a happy July!
Posted by Katie Edwards at 22:32