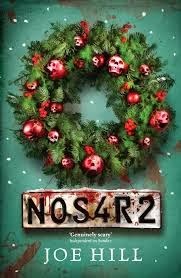 Victoria McQueen has a talent for finding things. As a little girl, she cycled across the Shorter Way Bridge near her home, to come out miles away. Throughout her turbulent youth, all she had to do was go out on her bike and the bridge would take her wherever she needed to go. But one day, an angry, teenaged Vic found Charlie Manx, kidnapper, serial killer, and vampire of sorts, and she barely escaped with her life. Sixteen years on, Manx snatches Vic's son in his vintage Rolls-Royce Wraith (number plate N0S4R2 or N0S4A2 depending on which edition of the book you're reading.) Wayne (first name Bruce) is whisked away to Manx's Christmasland, a place that promises eternal happiness, fun and innocence. But Vic McQueen will do anything to get her son back.

Vic McQueen is a messed-up character, there's no doubt about that. Combine a childhood of living with parents who loathed each other with her reality-defying gift and her near-death experience at Charlie Manx's, and it's no wonder she went off the rails. But I found it impossible not to like this tough-talking, tattooed young mother just trying to make the best of things despite her brokenness. In the aftermath of her first encounter with Manx, the adult Vic goes through various institutions, and emerges not sure of what is true and what is illusion. It is notable that Manx's return into Vic's life coincides with her running out of medication. Though it's pretty certain that N0S4R2 is a tale of the supernatural, Joe Hill subtly introduces a hint of doubt. There are times when the same scene is shown from two different points of view, each account differing just enough to make you question the narrator's reliability.

Vic is one half of the most unlikely but endearing couple, and I will continue to call them a couple though they are separated at the time of their son's abduction. Lou is the improbable knight on a shining motorbike who helps her escape from Manx; overweight and nerdy, Lou is an archetypal "loser," but he has a heart of gold and an enduring loyalty. Even when Vic and Lou are apart, their love for each other shines throughout.

In N0S4R2, Joe Hill has created characters you can really care for. Even people who appear for just a scene or two are rounded out and make you feel for them - a very dangerous thing in a horror novel. Due to the genre, you know that dreadful things are sure to happen, but I found myself aching for certain characters to be spared. Surely they must be immune? The devastating impact of each death reaffirms that no one is the expendable extra, that when a serial killer is on the loose, there is no containing the consequences of his actions. No man is an island; the redshirt is a myth.

On the other hand, the villains are repulsive. Manx is awful enough, evil and twisted enough to convince himself that he is doing what is best. But his henchman, Bing, is so much worse, utterly vile, a rapist and murderer, broken in the brain, and unlike Manx you get to see inside his mind. His point-of-view chapters made me feel defiled just by reading them.

At nearly 700 pages, N0S4R2 requires some commitment, but it is a twisty page-turner, an unusual and attention-grabbing thriller. Each chapter takes the story in a new direction. In some ways, I was hesitant to read much of the book in one sitting, for fear of what might lie in store for the characters, but that was continually overridden by the desire to get caught up in this adventure and spent my time in the world of the novel.

I wasn't planning to buy the book this year (whoops - I mean last year!) although I've had my eye on it since its hardback release. The current edition in the shops is the unpopular trade paperback - size of a hardback, but with a paper cover, neither one thing nor the other - and I had planned to wait for the smaller paperback. But Hanna, Sarah, Laura and perhaps some other people I've missed, kept raving about the book and as it was a Christmas-themed book, I could not wait another year. I'm very pleased I gave in: N0S4R2 was an excellent beginning to the new year. Let's see if the rest of 2014's reading can live up to this one.


Christmas was almost three months in the rearview mirror, and there was something awful about Christmas music when it was nearly summer. It was like a clown in the rain, with his makeup running.

He was as tall as Lincoln and just as dead.

"I am a leaf on the wind," Lou said, and the man-nurse said, "Dude, don't say that. I don't want to start crying on the job."  (Hurrah for the Serenity reference!)

He believed in his own decency with all his heart. So it was with every true monster, Vic supposed.