Well hello to you all, and a happy new year. Again.

2014 seems to have got off to a positive, if sleepy start. I'm blaming the weather for getting inside my brain. Apparently there has been a little sunshine, but if this rumour is true it is unverified by me, as I've been working when it has shown its face. So far, however, I haven't let the bad weather get to me this winter; I've been enjoying being wrapped up in a duvet reading, watching DVDs and internetting the evening away. (Oops to the last.)

I seem to have gone a bit overboard on resolutions this year, in an attempt to reclaim my life and really make this year worthwhile. Last year had some wonderful moments, but it also had some long stretches of dreariness, and I'd like to look back over each month this year and say, "Ah, yes, this is when I did such-and-such." Let's see how well that goes... 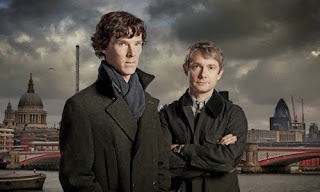 New Year also saw, at long last, the return of the BBC's Sherlock. Who else saw it? After the end of series 2 in January 2012, all the talk was: how did Sherlock fake his own death? Series 3's opener, "The Empty Hearse" was more about this question, and the big reunion with Dr Watson, than it was about the usual genius deductions and big mysteries. The main plot reminded me a lot of V for Vendetta. But what of the answer to the big question? Three solutions were provided, some more preposterous than others in a clear nod to all the fan theories that have been all over the internet for two years. But do we believe Sherlock's answer? Anderson, to whom he revealed his secret, picked holes in the revelation, and declared it "disappointing." I'm inclined to believe that Sherlock did not tell the whole truth, but is this all the answer we're going to get? Much of the internet says yes, citing the episode's use of the language of prestige, that "a magician never reveals his tricks." True. But I'm inclined to hope that the truth will be revealed eventually, probably at the end of episode 3. Sherlock is not about the unexplained; his method is to wow us with his incredible, complex but often quite mundane methods of deducing the truth. Writer Steven Moffat (also head writer of Doctor Who) has attracted a lot of criticism over the last year or so, and yet I retain my faith in him as a master storyteller, in command of every plot thread. And he did not write "The Empty Hearse," Mark Gatiss (also the actor who plays Mycroft Holmes) did. Yes, Sherlock is a joint project between these two writers (and some others) but I have a feeling that Moffat would want to write the big reveal himself. Did he write episode 3? Not sure, but as he's only co-written episode 2, I suspect he probably did. 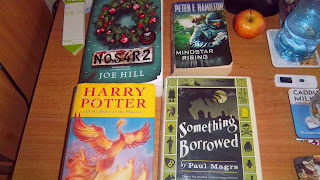 Bout of Books 9.0 starts tomorrow; probably the most popular bloggers' readathon, and a chance to get through some of those books I really ought to have read by now. I've been reading N0S4R2 for about a week now, which really does live up to the hype! Written by Joe Hill (son of a very famous horror writer) it is a real page-turner: a serial killer, a take on the vampire genre (and not the sparkly sort) and a girl who can find lost things. I've also got Mindstar Rising, a science fiction/mystery book borrowed from my friend Jamie, Something Borrowed, sequel to Never the Bride, which is a library book I keep on renewing, and Harry Potter and the Order of the Phoenix. This book is my least favourite and I've suspended my Potter reread in favour of my Christmas books. Umbridge is so unpleasant I can't even love to hate her; she just makes the book feel oppressive and hard work. But I'd like to finish the series before reading The Cuckoo's Calling, and I want to have read that before it's published in paperback.
Posted by Katie Edwards at 14:07