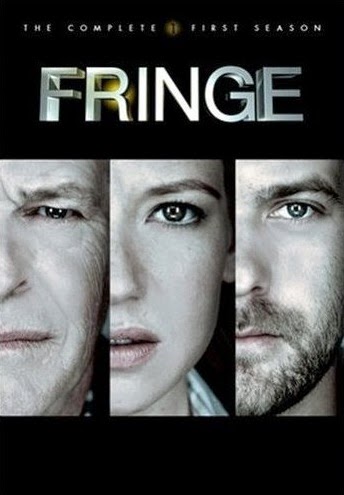 Fringe was a TV programme that didn't appear on my radar until very recently. I completely missed it when it was first aired in 2008, and just recently on my voyages through the internet, many conversations with my fellow geeks seemed to end up referring back to this TV programme. I borrowed the first season from my sister's friend Bob, knowing only that Denethor and Pacey team up to investigate weird goings-on and do battle with J.J. Abrams' signature lens flare.

It took me a few episodes to decide whether I was going to enjoy Fringe or not. At first, it is very much a weird-phenomena-of-the-week show, sometimes gruesome, often intriguing, and usually involving very dubious science. I'm really not very scientifically-minded at all, and even I had issues with believing that one could actually discover the last thing a person saw before they died by, essentially, using their eye as a slide projector. I'm not sure one can really classify Fringe as science fiction, though it tries to at least imitate realism. Perhaps it tries too hard. I can accept Doctor Who with phrases such as "wibbly-wobbly-timey-wimey," but in Fringe I caught myself saying "I don't think it works like that," several times. Once I'd got used to suspending my disbelief, I found it a "just one more episode" sort of show and blitzed through the entire season in about five days. Obviously it's doing something right.

The viewpoint character, is Olivia Dunham (Anna Torv), an FBI agent assigned to the Fringe division, which investigates anything that can't easily be explained. I was surprised and pleased to find a female character in this role. She is the audience viewpoint character, and we see this weird underside to the world through her eyes. She is tough and efficient, with a death glare that could wither iron, holding her own among a male-dominated workplace, and when accused of getting too emotionally involved in her cases by a chauvinistic superior, she points out, yes she does care. That's what makes her so good.

Although Olivia is the protagonist, I think it is clear from early on that the central character is Walter Bishop a brilliant, if unorthodox, scientist who has spent the past seventeen years in a mental institution. Though not FBI, he and his estranged son Peter become the crucial members of Olivia's team, performing the experiments which provide the impossible answers to impossible mysteries. As the "mad scientist," bumbling about in his own world, Walter provides most of the show's humour, with his random fixations and outrageous ponderings, but also its heart. Every so often Walter snaps out of his befuddlement and acknowledge how broken he is, or how he has failed his son. I suspect that the next time I watch The Lord of the Rings, I will view Denethor a lot more sympathetically. John Noble plays both characters, who are mentally unstable and have fraught relationships with their sons.

Fringe Season 1 has two longer-term story arcs on top of the weirdness-of-the-week: one concerning the mystery surrounding Olivia's deceased partner (in both senses of the word) John - was he a traitor or not? - and one about a mysterious cult or possibly terrorist organisation called ZFT, who seem to be behind a lot of the paranormal phenomena. Collectively, all the events that can't be explained by conventional means are referred to as "The Pattern," which seems at first to be a misnomer as there doesn't appear to be much link between, say, someone turning into a kind of were-possum-porcupine on an aeroplane, and a wild boy who can predict when murders are going to be committed, or someone who dies of old age within half an hour of being born. But the investigations keep leading back to ZFT, and the pieces start coming together into the season's main plot, even if it takes a while to figure out what that plot is going to be. And it turns out that Walter's forgotten past lies at the heart of the mystery.

The same name keeps popping up throughout the series: Dr William Bell, Walter's old mad-science partner, who while Walter has been incarcerated, has lived a long and prosperous life,* at the head of a big corporation called Massive Dynamic, with whom Olivia comes into contact again and again. It is unclear whether Bell and Massive Dynamic are to be trusted; clearly they are up to something. And then it emerges that not only are Massive Dynamic and Walter Bishop deeply mixed up in "the Pattern," but so is Olivia - as just a small child, she was the subject of weird psychic experiments performed by Walter and Bell**, and now, 25-30 years later, she is affected by them, catching glimpses into alternative universes, and finally, in the last episode, being transported across the divide into one of these other worlds. Olivia finds herself in an office, and a figure appears, his face hidden in shadow in a slow reveal of who could only be the infamous Dr Bell - but the voice is distinctive, and then Leonard Nimoy steps into the light, and I actually fall off my chair in surprise. (Curiously, before deciding to watch Fringe, my other option of which boxset to watch next was Heroes, which I knew had a Spock actor playing the villain, in that case the pretender Quinto.*** Though I haven't yet figured out whether William Bell is actually the bad guy or a morally squiffy anti-hero type. Or another thing altogether) Olivia demands to know where she is, but Bell says that is a complicated question. The camera slowly pans out of the window, and I think it is impossible not to get the shivers as the Twin Towers of the World Trade Center are shown to be still standing tall in a time when Barack Obama is President of the United States. Thus ends season one, and I suspect that the weirdness has only just begun!


*sorry not sorry
** who I've only just realised share the same initials - symbolising two sides to the same character, perhaps?
*** I don't mean it, Zachary! You are largely to blame thank for me getting into this whole Star Trek malarky in the first place.
Posted by Katie Edwards at 20:03