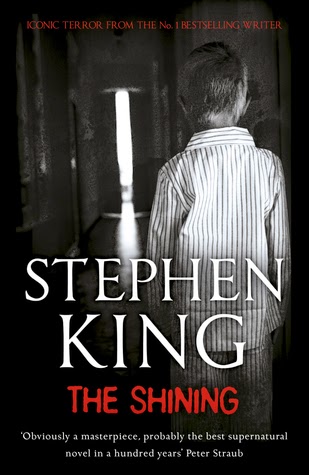 I first read Stephen King's The Shining at university, in my Gothic Fiction unit of my Literature degree. I came to the book with preconceptions, the famous bits of the Stanley Kubrick film. But although these scenes gave me a pretty good idea of where the story was going, none of the most memorable scenes of the film come from the book. I was familiar with Jack Nicholson's particular brand of crazy, and read the book just expecting it to build up to that moment. This time around, I took the book as it is, watching the struggle of Jack Torrance, who, if not exactly a good man, is a man trying to be good.

In case you're unfamiliar with the story, The Shining takes place at the Overlook Hotel, a popular Colorado tourist resort in the summer, but in the winter an undesirable place, cut off from the rest of the world. Jack Torrance takes a job as the winter caretaker, and moves in with his wife Wendy and five-year-old son, Danny, a bright young boy with a very unusual talent. Danny knows things that he shouldn't know, sees things that no one else can see, a gift that Mr Halloran, the Overlook's cook, refers to as "shining."

In a great gothic novel, the setting is a character in its own right, and the Overlook Hotel certainly is that, with its history of dark deeds and sinister deaths, and its isolation. It's one thing having characters separated from the outside world in centuries past, in ruined castles with dark, dank dungeons. But in America in the twentieth century, how isolated can the Torrance family really be? If you're the owner of a hotel in the Colorado mountains, and you're employing someone over the winter months, you'd make sure they can't get stranded there, right? The Torrances arrived at the Overlook by car, the hotel has a telephone, a radio and a snowmobile. But as the story goes on, Stephen King takes away these connections with the outside world, one by one, by a combination of natural and supernatural means.

The Overlook has a malevolent personality, and Danny's "shining" feeds it, make its powers stronger. The Shining contains several features of a conventional haunted-house story: the clanking elevator in the middle of the night, the topiary animals that move, the thing in room 217 - but its real terror is the way that it works with the Torrance family's own inner demons. And boy, does Jack Torrance have a lot of those! What marks Stephen King as a master storyteller rather than merely a horror writer, is the way that he makes us care for his characters before throwing terrible things at them to cope with. Jack Torrance is a troubled man: a recovering alcoholic with a deadly temper, clinging desperately to his pride. A former private school teacher, Jack lost his temper and his job, and what keeps him at the Overlook long after he and his family should have fled for their lives is his need to be provider and head of the family, his terror that this is his last chance and that if he messes this up he might never get another job. The Shining shows a family that has been under a lot of pressure, but is emerging from a dark period with a glimmer of hope - and then cruelly snatches that hope away in the story's terrifying finale. Jack's memories of his childhood and the darkness in his more recent past foreshadow the events in the book's finale, posing questions about addiction, inherited behaviour and fate. The real horror of The Shining is that it is unclear how much of what Jack becomes is natural, and how much is supernatural.

The Shining now has a sequel, Doctor Sleep, now available in paperback.
Posted by Katie Edwards at 20:00