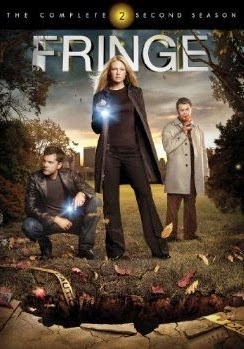 After season one's breathtaking finale, in which Agent Olivia Dunham was whisked into a parallel universe to come face to face with the mysterious William Bell in a still-standing World Trade Center, we return to the original universe where the Fringe team are trying to piece together the mystery of what happened to her. Olivia is little help. Returned unconscious to her own world, her memories are vague and formless, returning gradually over the course of several episodes. The series goes back primarily to its former weirdness-of-the-week format, with a side plot involving shape shifters from the parallel universe, and while in equal measures compelling and ridiculous, I found myself impatiently wanting to know more about the bigger picture.

Season two goes into detail about the characters' backstory to reveal a devastating secret about Peter Bishop, who is not from this world at all! In a poignant and powerful flashback episode (with its credit sequence and other graphics redone '80s-style) we learn what had been previously hinted. Our Walter Bishop's son died from a childhood illness, but our mad scientist discovered belatedly how to save him and stepped into the other world to do for his counterpart's son what he could not do for his own. Only, he could not let this other Peter go back to his old life, but kept him and brought him up as his own child.

Oh dear, I thought. If our Walter has spent seventeen years in a mental institution, what effect would the loss of his son have on the other Walter (which he nicknamed "Walternate." Because of course.) The answer was not what I had expected. This other Walter has risen to a power, possibly taking the Bell role as the authority in this slightly but significantly different reality. (That world's Bell died in a car crash as a young man, a point that strikes me as suspicious.)

The season's grand finale sees Walter joining forces with his old mad-science pal-turned-enemy, Dr Bell, when our heroes cross over to the other side in an attempt to bring Peter back, but ends on another beauty of a cliffhanger when the wrong Olivia Dunham makes the return, leaving our protagonist stranded on the other side.

10. Grey Matters. Some of the reason for Walter's madness and loss of memory becomes clear. This episode is not to be compared to a previous time when Leonard Nimoy and ridiculous science-fiction brain surgery were in the same episode.
14. The Bishop Revival. A Nazi serial-killer has links with Walter's family history.
15. Jacksonville. Two buildings from different universes vie to occupy the same space, with gruesome results. Olivia's journey back into the nightmares of her childhood reveal some surprising results.
16. Peter. Fringe, 1985. Backstory galore, best episode yet.
22-23. Over There. The season finale: we meet the Fringe team's other-world counterparts, and discover that despite his dodgy ethics, Dr Bell has been, and always shall be Walter's friend.
Posted by Katie Edwards at 08:30