Wellll... my October blogging hiatus seems to have stretched through November as well as I got attacked by the plot bunnies on the eve of NaNoWriMo and have been putting all my writing energies into getting this new story into some sort of shape. Meanwhile, the list of things I really want to write about gets longer and longer... Some of it will probably have to go, but Stephen King's time-travelling epic 11.22.63 is not one of these, as it has shot right to the top of my Books Read In 2014 list, even overtaking The Martian which held the top spot for so long. It was a birthday present from Hanna, who wrote the review persuading me that I absolutely had to read it right now about two years ago. Whoops. 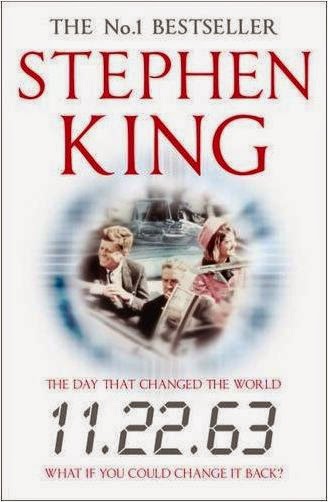 What if Kennedy was never assassinated? This is the question posed by Stephen King in this novel. Jake Epping, a teacher in his thirties, is shown a portal to the past by his dying friend Al. This gateway through time, in the back of the pantry of Al's diner, leads directly to 1958. Always the same time, always the same place. Al gives Jake the mission: to alter the course of history by preventing Lee Harvey Oswald from assassinating President John F. Kennedy. But what neither of them count on is for Jake making himself a new life in the 1960s and falling in love.

11.22.63 was very different from what I'd expected - my preconceptions were that the story would mostly focus on how the Kennedy assassination changed the world, and how different everything would be if it had never taken place: the impact of drastic changes to the timeline. In reality, the time portal sends Jake back to 1958, giving him five years to prepare, and to immerse himself (and us) into the world of the past. King paints a full picture of different places in America over fifty years ago, from creepy, unfriendly Derry (setting of his even bigger brick of a book IT - can't sleep, clown'll eat me!) to the seedy part of Dallas that was home to the Oswalds, to the place Jake comes to call home: Jodie, Texas, with its wholesome yet entirely human teenagers, good friends and of course, the lovely library Sadie Dunhill. You really live within these pages, grow to care about the characters, and I would have been quite happy reading 750 pages just about Jake's day-to-day life in Jodie, with Sadie. Everything seems wonderful - or at least, mostly a success; despite the past's resistance to Jake's every move, he seems to be mostly victorious. But through it all is an undercurrent of foreboding, thanks to the prologue in which a horrified Jake laments, "What have I done?" We can't quite forget, much as we'd like to, that some terrible consequences must come as a result of Jake's meddling. I've said it before: this is how Stephen King gets his readers. He makes us love his characters so that we feel so much worse when everything goes wrong.

You don't need to know too much about 20th Century American history. King educates us by sending us back in time with someone who never paid a lot of attention to history class, and immersing us into the middle of things we may know about but might not have thought about too deeply, illustrated with details that remind us that ordinary and extraordinary people lived through this time; it was more than just dry information on the page. I was well aware of the Cold War, the Cuban Missile Crisis, that everyone thought that nuclear war was inevitable, but I hadn't thought before about how it would have affected people in their day-to-day life. But King recreates that atmosphere of fear, that certainty that armageddon was only a matter of time, and I could not help but remember the days after 9/11 when the western world had to come to terms with the idea that we were not invincible after all.

The rest of this review could be considered spoilery.

"The past is obdurate. The past harmonises."
Stephen King brings a fascinating new version of the time-travel narrative which has coloured my thinking every time I encounter the trope, every time I watch Doctor Who or Star Trek or Heroes. Because in this universe, the timeline is fixed in a certain way. Every time Al or Jake travel in time, they hit a reset button. Any changes they might have made on their last visit to 1958 will have reverted back to their original course, causing the list of things to be "corrected" to grow longer and longer on every visit. But the more you alter the past, the harder the universe fights to resist your efforts. With that in mind, the ending was the inevitable catastrophic success, which did not prevent me from feeling genuine terror when Jake is told, "You need to go back and see exactly what you've done."

"I thought of an old ad for Memorex audiotape. It showed a crystal glass being shattered by sound vibrations. By pure harmonics."

Other (spoiler-free) reviews of this book from Hanna and Charlotte.
Posted by Katie Edwards at 14:52