What I've been re-reading: 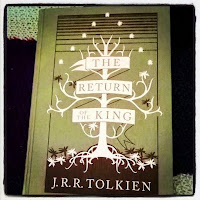 I kicked off this week's re-readathon by finishing off The Lord of the Rings, which I've had on the go since the beginning of the year. The idea was that I would read one chapter before bed each night, and also one in the morning on my days off work. However, I would get sidetracked by my other reading, or watching DVDs in the evening instead, so I'd left Frodo and Sam wandering around Mordor for about a month. I always seem to read the last few chapters all in one go, once the Ring has been destroyed, and thus it was today. I saw the celebrations in Gondor before work, and the journey back to the Shire and beyond this evening, although I did not read all the appendices this time.

It struck me how anticlimactic the "Scouring of the Shire" scenes are, after the epic adventures, battles and hardships our heroes had experienced throughout the book; how relatively easy it was for them to overthrow the bullies who had taken over the Shire. Even Saruman is a petty villain at the end. It goes to show how sheltered the hobbits were in the Shire, and how helpless, and how much Frodo, Sam, Pippin and Merry grew in the year or so they had been away. But though the destruction is fairly minor compared with the horrors of Rohan, Gondor and Mordor, it hurts more because it is home.


What else I've been up to:


I worked a short shift this afternoon - though it was so quiet that it did not feel short at the time. It was a bank holiday - where was everyone? I also did some ironing and tidying at home, and spent some time filling in pages of my Ready, Set, Novel! and 642 Things To Write About workbooks. Now I'm going to put on a couple of episodes of Battlestar Galactica before bed. I watched the initial miniseries in February, and took just over a week to watch the first two full-length seasons. Things are looking very grim indeed on New Caprica...

Today was a day off, so after doing some laundry and cleaning my room, I buried myself in Alan Moore's masterpiece Watchmen. Even though it's a graphic novel, it is far from being "light" reading; to get the full benefit, you have to pay attention to the details in the pictures as much as the words, and so it will take just as long to read as any other 400-page novel. On my second reading I was able to pick up on a lot more clues and symbolism hidden in plain sight - such as Rorschach's other identity, right there from the very first page - and subtle foreshadowing, as well as paying attention to the writing; the way that one scene ties in with the next. Last time around, I didn't really pay much attention to the pirate story, being more interested in the main plot, but today I read the "Tales of the Black Freighter" story observing how each panel of narration from the comic-within-the-comic has close parallels with whatever else is going on around the reader.

I was at work today, so haven't done a huge amount of reading, but I began The Universe Versus Alex Woods during my lunch break. The character of Alex was just as lovable as I'd remembered, but where, on my first reading, I felt that he came across as very young for seventeen, today, starting the book (which begins at the end of the story) and knowing how Alex got to the point where we first meet him, I recognised that actually he shows great maturity and calmness in an extraordinary situation.

When I got home, I finished Watchmen and, even knowing what was coming, still felt the full impact of the villain's shocking revelation: (spoilers)


"Do you seriously think I'd explain my master-stroke if there remained the slightest chance of you affecting its outcome?

"I did it thirty-five minutes ago."


Do you have a book that you read over and over (or one that you collect multiple copies of)? Why do you read it so much? What is it that keeps you coming back to it?

My friends and regular readers will know which book I've selected here! I've written many times about my love of L. M. Montgomery's Anne of Green Gables. My parents bought me a hardback containing the first two Anne books when I was eight years old, and it was love at first sight. I believe Anne Shirley was the first fictional character I encountered who not only felt like a real person, but who felt like a real person like me. I was drawn to Anne because, like me, she was chatty, scatty, accident-prone and had a vivid imagination. As a little girl, I loved reading about the scrapes she got into, and as a teenager I grew to identify with the bittersweet nature of change. But ultimately I return to Anne as a comfort read; her optimistic outlook restores faith in humanity when I'm feeling jaded, without being as cloying as, say, Pollyanna, or as moralistic as What Katy Did. Avonlea and its residents feel like a timeless safe place, a retreat from a cynical world, with people I know so well that it comes as a surprise to discover some of them only appear in one or two books, and as supporting characters at that. When winter turns to spring, and daffodils start to appear; when I see blossom on the trees: that is when I feel closest to Anne. 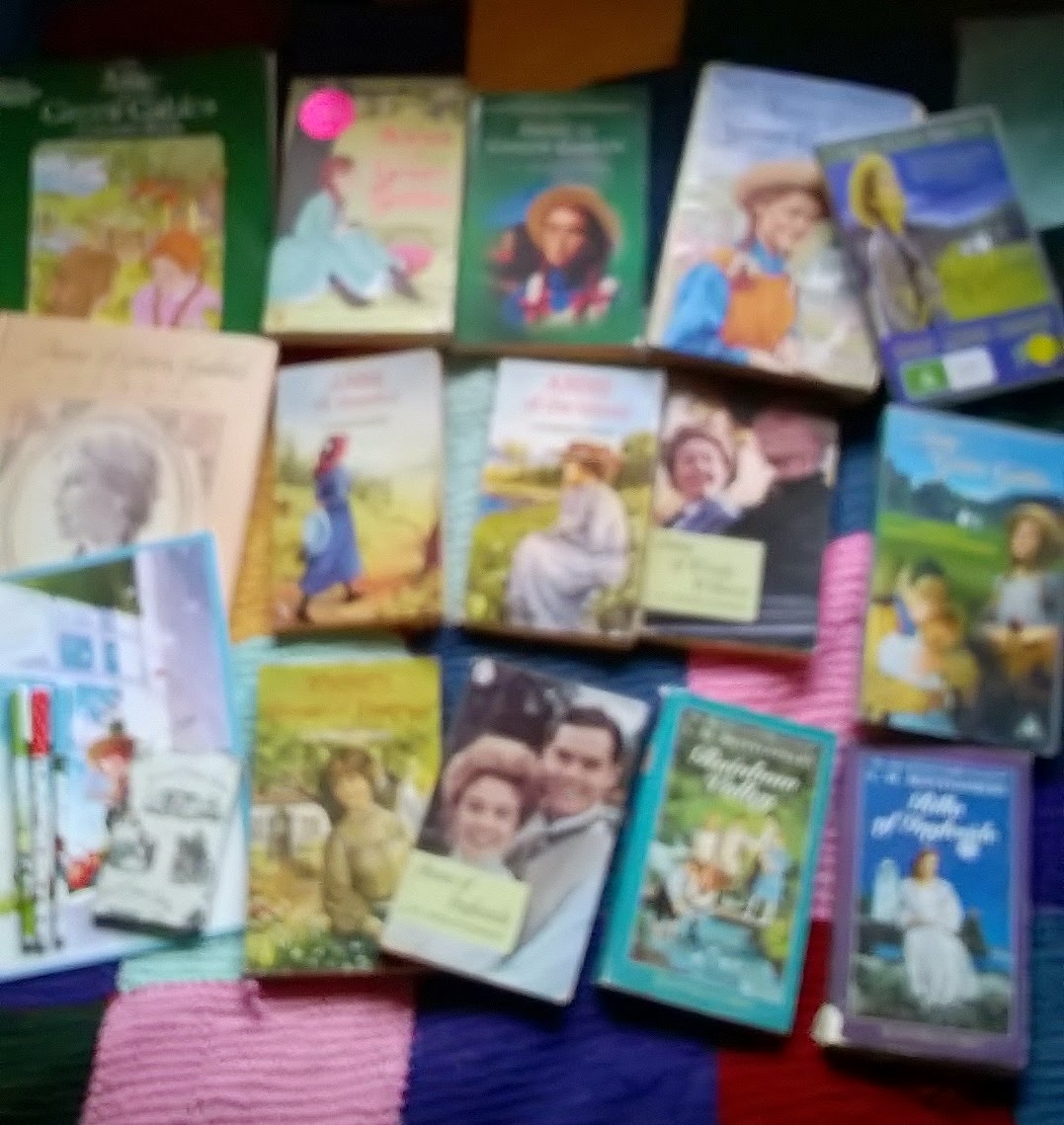 I have three copies of Anne of Green Gables: the original large hardback, the 100th Anniversary paperback - for my handbag - and a spare, second-hand paperback that doesn't matter so much if it gets damaged. Three seems a sensible number - any more, and I'd have to start collecting in earnest and buy all the copies! Also pictured: the entire series, the colouring book, the journal, an exercise book and matching pens, the address book, the VHS of the 1985 adaptation (abridged) and the DVD (full-length.) Not pictured: a poster which was sent by Sarah as part of my Ninja Book Swap parcel, and the 1970s BBC Anne of Avonlea, which is not nearly as good as the 1985 Anne, but fills in the gaps in the story omitted from The Sequel, which I do not own. Apologies for the blurry picture.

Yesterday was Election day in the UK, and after work, and after I'd voted, I hid myself away in my room, ignoring the world. I shut down my computer and switched off the internet connections on my phone, because I can only handle a certain amount of politics before I feel angry, depressed and disgusted. While waiting for it all to be over, I read a bit more of Alex Woods, which I finished off around lunchtime today. It's my dad's birthday, and we had fish and chips. I've been off work today - now it's a quieter time of the year there are not a lot of overtime hours available. Alex Woods was just as funny, heartwarming and philosophical as I remembered. I've now moved onto When God Was A Rabbit, which I had forgotten a lot about. Judging from the first few chapters, it is considerably darker than I recall. I'd thought of it as a cosy, quirky family saga, but there's quite a lot of angst beneath the poetic narration!

Although I enjoyed Sarah Wiman's When God Was A Rabbit on my second reading, I found it, oddly, slow-going in the first half, and simultaneously quite busy. Often I enjoy the scene-setting childhood chapters of a family story as much or more than the main plot, but I found myself growing a bit impatient. The second half held my attention better, but the tone shifted awkwardly from overwhelming tragedy to lucky but unlikely coincidence. Sometimes it felt a bit contrived. However, the novel shone in its depiction of the events of September 11th, 2001, the terror, confusion and incomprehension of the unprecedented terrorist attacks on New York City.
Saturday and Sunday

If you work in retail, and agree to work weekends, you can't expect ever to be taken off that shift! So it was quite a luxury for me to only work a half-day yesterday. I spent the morning reading To Kill a Mockingbird, one of those books that demands to be read every couple of years or so. In the evening, I had the house to myself, so I watched the film of Watchmen. That is definitely a story that improves with every reading and/or viewing. I had seen the film before, but a long time ago, and before I read the book. My initial judgement was that it was okay, with a very memorable opening sequence: a montage of scenes from twentieth-century history, in a world where superheroes were real, set to Bob Dylan's "The Times, They Are A-Changin'." I think the film is best watched after reading the book at least twice, when you know the story well enough to appreciate all the little details of world-building, and how faithfully they have recreated the book, frame by frame. I felt that the ending was a little weaker than the rest of the film, possibly because it's changed from the book. Admittedly, on my first reading - after seeing the film - I thought the book's ending was weird, over the top and unnecessarily complicated. On my second reading, I realised that was entirely the point, and that the clues were spread throughout the novel, leading up to the shocking finale. Admittedly, to recreate that well for film, you'd probably end up with a movie at least three hours long - I believe there is an extended cut that length already. As it happened, I was astonished when we reached the final act, already. It was two and a half hours, long, but it didn't feel it. Usually I lose concentration at about the 90-minute mark of any film, but this time Watchmen sustained my interest throughout.

This morning I had a mild case of anxiety out of the blue, and with no discernable cause, so I took myself, my book (To Kill A Mockingbird) and a cup of tea off to the park before lunch. I initially planned to try to finish the book today, but I think it is a novel to take one's time over, not to rush, so instead I shall take it into the Bout of Books readathon next week. This is one of my favourite book-blogging events, but this week I'm going to participate only through Twitter and possibly the occasional Instagram post. I'm on holiday (hurrah!) and going up to York for a few days at the end of the week. I've never been to York before - can anyone recommend anything that I must see or do while I'm up there? On Saturday, I'll also be going over to Chesterfield to meet up with Ellie and Hanna (and, naturally, do some book shopping!)

Stats for the Rereadathon:

Books read from: The Lord of the Rings: The Return of the King - J. R. R. Tolkien
Watchmen - Alan Moore
The Universe Versus Alex Woods - Gavin Extence
When God Was A Rabbit - Sarah Winman
To Kill A Mockingbird - Harper Lee
Pages read: 1380
Favourite reread: Watchmen
Favourite quote: From Watchmen:


But the world is so full of people, so crowded with these miracles that they become commonplace and we forget...