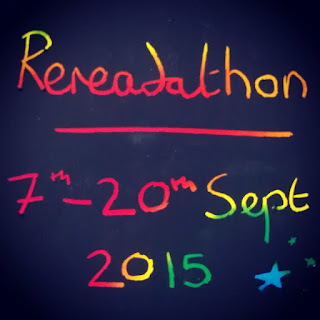 Hurrah! The long-awaited Rereadathon 2.0 is here at last. We had so much fun rediscovering old favourites back in April that Bex decided to bring back a bigger and better Rereadathon for the autumn; just the right time to settle down to a day of reading books that you know you'll love because you've read them before. Guaranteed no duds!

After a lot of deliberation, I've narrowed down my to-read list to a manageable amount (even if the resulting stack won't fit in a single pile on my shelf.) I've chosen five books I've discovered in the last two or three years: The Martian, 11.22.63, Fingersmith, American Gods and Fangirl, but interspersed with these big reads (and some of them really are doorstoppers) I've also picked out a few of my favourite school stories from childhood, to read in preparation for this November's NaNoWriMo project which will draw on that story tradition and mix it up with a bit of time travel and geekery. From my school-stories box I've selected The School at the Chalet and Jo of the Chalet School by Elinor M. Brent-Dyer First Term at Malory Towers, The Twins at St Clares and The Naughtiest Girl in the School from Enid Blyton, Anne Digby's First Term at Trebizon (a slightly more contemporary boarding school series) Charlotte Sometimes which features time-travel in a similar but different way from my project, and The Girl in the Blue Tunic by Jean Ure, which is a ghost story. So quite a variety within the genre.

But for today, I'm starting with Andy Weir's The Martian, to remind myself of it before the film is released. I've just discovered that the cinema date for the movie has been moved forward to the weekend of my 30th birthday at the beginning of October - what a treat! I've found it easier to get into this time around, as I've remembered most of the astronaut terms that befuddled me the first time around, but it's still quite a slow start, very science-heavy, and I didn't really like science at school. (More to the point, I don't think I liked science lessons. It was an all-girl class, and there was a lot of pairs work, and I was usually the odd one out having to tag on with another two people's experiments. But I quite liked physics and some chemistry, and science fiction has reignited my interest in actual science, especially if it involves space.)

I've recently discovered that I can have good reading days and good writing days, but it is very difficult to motivate myself to start a writing session once I've got myself lost in someone else's good book. Yesterday was a prime example of that. I scheduled a mid-afternoon writing session to break up my reading day. That got shifted to after dinner... which slipped back to about ten PM before I actually got started. Whoops! So I determined that today, I would take my laptop down to my favourite local coffee shop for an hour or two before my scheduled hairdresser appointment this afternoon. But it was too early to really set out, so I picked up the first Malory Towers book... just for a chapter or two...

First Term at Malory Towers was my introduction to the girls' school story genre, when I was about 9 years old and would read almost nothing but Enid Blyton books. I wasn't expecting a school story, and was very confused at first by the main character being called Darrell but having female pronouns. (Remind me to tell you about my primary school recorder teacher, Mr Ashley, who wore a skirt and and was referred to as "she." It wasn't until I saw her leaving card when she retired that I learned her name was actually Miss Rashley...)

Objectively, the Malory Towers books aren't very well written. The first one starts off with my most detested trope of all: the character standing in front of a mirror and telling the reader - out loud in this case - what she sees. But it has a really vivid sense of place and character, and I absolutely loved it. But there are a lot of things in the book that have always bothered me, big and little (as well as finding new things to pick holes in later on.)
I did manage to get a scene written this afternoon, which means that this evening I can concentrate on finishing The Martian. It's really getting exciting now...

Books read today: First Term at Malory Towers
The Martian
Pages read today: 172 so far
Books finished this week: 1
Quote of the day: "As with most of life's problems, this one can be solved by a box of pure radiation." (This quote from The Martian, not Malory Towers!)
Posted by Katie Edwards at 17:16