Hello. Sorry I haven't posted much recently. I'm expecting it to be quiet for another couple of months here on the blog, as I'm trying to focus on my novel-writing, and next month being NaNoWriMo I don't expect to get a lot of reading done. But I've been reading lots and plan to at least do some mini-review posts over the next few weeks. I've also got an idea for writing about modern adaptations of classic novels, in book, film and webseries formats, so watch out for that.

I've managed to carry out my read-2-buy-3 rule up till the end of September, getting my to-read pile down from 38 books to 21 (22 if you count what I'm reading at the moment.) But this month, being my birthday and having scheduled a couple of book-shopping trips, I don't expect to keep to it. (I know that's another £20 I owe to the Beanstalk fundraiser, Bex. I'll pay that next month. I'm keeping track.) November and December I don't intend to buy any books for myself, due to NaNoWriMo and Christmas, so hopefully it'll balance out by the end of the year.

I've been quite restrained with my book-buying over the summer, I think, but last month I've had a bit of a splurge and brought home the following: 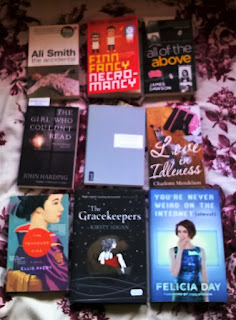 And today, I bought The Accidental by Ali Smith from the Waterstone's Books for Syria table. Guilt-free book-buying, as it all goes towards helping your fellow human beings.


I haven't made a to-read pile for October, as it's my birthday on Sunday and I expect I'll get some more books to add to my list (at least, I hope so.) But I'm excited about reading The Gracekeepers, which the bookseller I bought it from raved about, and which I've had my eye on for a while. Ali Smith is an author I've kept coming across in the past few years, but I've never actually had any of her books until now. And I'd like to read some more of the proper sci-fi and cheesy sci-fi I've picked up over the last year, mostly second-hand.

I'll be turning thirty this weekend, which I've been dreading for a long time. When I left university in 2007, I consoled myself with the thought that it might be a struggle figuring out what I was going to do with my life, but by the time I was thirty I'd surely have things sorted. And the years passed by, quicker and quicker, and I still have no idea what I'm meant to be doing after all. But in the last few months I feel more at peace with that, My life may not be where I thought it ought to be at thirty, but I'm seeing the good in my situation. I work part-time - but that means I have more time which I can focus on my writing. I am writing again, and that means I feel like I've got back in touch with who I'm meant to be. No, I'm not published yet, but I'm walking back towards what Neil Gaiman referred to as my "mountain" - I'm heading towards of my goal. It might be a long way off still, but I'm walking in the right direction again.
Posted by Katie Edwards at 17:50