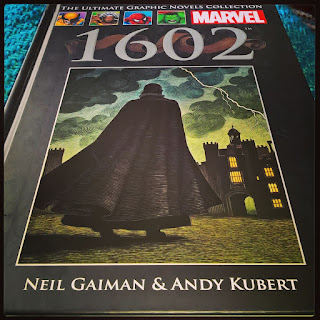 I'll confess it right away: most of my knowledge of the Marvel universe comes from the films, and general popular culture osmosis. I've been borrowing some of the comics recently, from the library and friends, but am well aware that I've barely scratched the surface. Even when I pick up a new series, there are so many other stories that have come before that point, and so many characters, that even though they work as stand-alones, and give the reader what information they need to know, I find myself working backwards to fill in the gaps of my knowledge.

1602 is a new story, a stand-alone graphic novel in eight issues. Set in England, at the end of Queen Elizabeth I's reign, it is peopled with some strangely familiar faces and names: the Queen's physician Doctor Stephen Strange, for example, and Sir Nicholas Fury, her head of intelligence, alongside his servant, a boy named Peter Parquagh. There are strange forces at work; storms and rumours of the end of days. Is it witchcraft? Could it be the work of Carlos Javier, master of a school for the sons of gentlemen, who are rumoured to be "witchbreed" with unnatural powers? Or does the source come from a young woman called Virginia Dare, returned from the colonies across the Atlantic with her quiet and huge "Indian" protector?

I wrote a post a year ago celebrating modern updates of classic stories, and the different ways to adapt the details in such a way as to emphasise the timelessness of the tale. In 1602, Gaiman does the same in reverse, cleverly using Elizabethan explanations and variations on the familiar characters and motifs. It was a lot of fun spotting the nods to the characters' more familiar incarnations, such as the teasing of Peter Parquagh's connection to spiders, and the blind and unmusical Irish minstrel Matthew Murdoch, with his song about "The Four from the (ship) Fantastick," the heroes of which become a part of the story itself; Carlos Javier, with his school for mutantur or "changing ones," including Scotius Somerisle and Master John Grey (whose true identity was never meant to be a secret.) Then, there is the Inquisitor, unnamed until late in the book, whose backstory is complex, conflicted and devastating. Other characters took their time for me to figure out their identity, whether through unfamiliarity or ignorance on my behalf, and the climactic revelation towards the end was so obvious retrospectively that I could have kicked myself. That twist was not, I feel, without its problems, and yet - as I so say time after time about Neil Gaiman's writing - it made so much sense on multiple levels, and left me gasping with the cleverness of it all.

1602 is a Marvel superhero tale, told as only Neil Gaiman would tell it; a glorious mixture of old and new. 20th century heroes and villains fit seamlessly alongside historical figures, obscure folklore and unsolved mysteries of the past. It is an extraordinary work of art that earns a high ranking in the canon of Marvel comics, and no doubt it will offer a deeper understanding on every reading.
Posted by Katie Edwards at 10:00