Ten Things I Love About Beauty And The Beast (2017)

Beauty and the Beast has always had a special place in my heart, since I was a little girl. Maybe it's the recognition of a heroine just as much of a dreamer and a bookworm as myself, perhaps it's the songs, the snappy dialogue, the humour. I'm pretty sure a lot of it comes from memories of my younger sister singing the opening number "Belle" and about Gaston's worrying egg habits, with great energy and glee. Whatever the reasons, I love that film, and so when I found out there would be a live-action adaptation, my wariness of remakes instantly became a thing of the past.

I didn't quite count on just how much I was going to love the new film, though. I don't consider myself a particularly romantic person, especially when it comes to fairy tales and Disney Princesses. I knew I would enjoy the film - how could I not? I was not counting on how happy Beauty and the Beast would make me. Quite aside from the nostalgia factor came the joy of seeing a fresh take on an old favourite, adding new depth and colour to the familiar tale. I fear the new - and the old - Beauty and the Beast will become my latest obsession; I could quite happily move into the cinema for the next month or so, just to keep watching that movie. 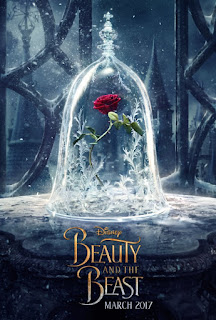 1. It will come as no surprise to anyone that the bookish Belle was always my favourite Disney character. Emma Watson's portrayal plays up not only her academic intelligence, but also her practical, down-to-earth nature and her stubborn independence. She sounds like a believable person, not an actress or a fluttery princess. (although that might be bias on my part, having a similar accent.)  I particularly appreciated her scenes with Gaston, when she turns down his advances with no excuses, no flattery, but a simple "no." Bravo, that girl!

2. Also, who knew Emma Watson could sing? And I don't just mean she has a pretty voice. She knows how to use it - and I think it's actually quite rare to hear such clean, clear diction, without a hint of warble or sliding from one note to another. (Actually, that goes for most of the performers, come to think of it.)

3. Many of the plot holes, continuity errors and flaws of logic that have puzzled me from the animated film are corrected in the update. Originally, we learn that the Prince was given until his twenty-first birthday to break the spell, but Lumiere sings "ten years we've been rusting..." - what kind of enchantress curses a bratty preteen like that? This time around, the time is kept vague. And then consider Belle's puzzling arrangement with the bookseller. How does he stay in business when the only reader in town treats his shop as a library? The new film sees Belle borrowing her books from the priest, Pere Robert, instead.

4. I'm aware this is maybe a controversial one - but I really appreciated LeFou's storyline. A lot of people were unhappy about the unfortunate implications of making the villain's buffoonish henchman Disney's first officially gay character, or felt that because he plays a pretty minor role it was a case of too little, too late, and fair enough. But I thought that after Belle and the the Beast, his was the most interesting subplot - yes, the slapstick sidekick gets a subplot of his own! LeFou is still a comic character - funnier, in fact, in his own right - but gets some wonderful character development in this version, as he gradually comes to realise the friend he adores is a dangerous man who will stop at nothing to get what he wants. LeFou's lines in "The Mob Song" gave me the shivers: "There's a beast running wild, there's no question/But I fear the wrong monster's released..."

5. The new film re-introduced some elements from the original fairy tale that were omitted from the animated tale, notably the rose that kicked off the whole plot. No, not the enchanted rose in the West Wing. The other rose. Also of note was the naming of Belle's village as Villeneuve - after Gabrielle Suzanne Barbot de Villeneuve, writer of the original "La Belle et la Bete."

6. I enjoyed the details that set Beauty and the Beast firmly in mid-eighteenth century France, complete with powdered wigs and make-up (even if the setting and dancing at the beginning made me think of nothing so much as the BBC's 2005 Casanova series.)

7. More was given over to the Beast's backstory; what made him the spoilt, selfish, loveless prince that he was, and why the household staff were punished (or, at least, felt as though they deserved to be punished) as well. He still doesn't get a name though.

8. There was an added element of poignancy for the enchanted servants, who stand to lose not only their chance of being human again if the Beast fails to break the spell, but also what little freedom they still retain, as they are becoming more and more like the objects whose forms they have taken.

9. Beauty and the Beast was always the most Musical with a capital M of all the Disney animations, with such glorious set pieces as "Be Our Guest" and ensemble numbers like "Belle," "Gaston" and "The Mob Song." Seeing the actors and sets brings home that this is more than just "the live-action version of a Disney film complete with songs. It is a musical - and there are a couple more epic ballads added to the film. I've been listening to the soundtrack on repeat since leaving the cinema yesterday.

10. Call me shallow, but I'm sure I'm not alone in finding the Prince Formerly Known As Beast a little disappointing once the spell is lifted and he is transformed. With Downton Abbey's Dan Stevens in the role, there is no such disappointment.
Posted by Katie Edwards at 09:00