Hosted by Jennifer at Crazy For Books

"What are your feelings on losing followers? Have you ever stopped following a blog?"

I don't actually like the word "followers" as it makes me think of a cult; I prefer "readers."

I'll start with answering part two of the question. I follow a lot of blogs, and enjoy coming home from work and reading what people have to say about the latest books and their own favourites. With such a lot, though, it's inevitable that I will visit some more than others, and every so often I will prune the list so it doesn't get out of hand.

I don't like to see the number of followers go down, but it doesn't bother me, as I know I'm not the only one who thinks this way. It's flattering to see the number go up, but if they don't actually read the blog it's nothing but vanity. If everyone stopped following at once, though, I would wonder what I was doing wrong. 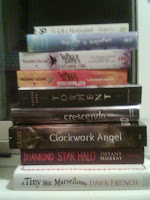 Oops, as a certain Miss B. Spears sang a few years ago, I did it again.
I had to, though. I couldn't not.
You see, to start with, in the store where I work, ALL kids' books are on a 3-for-2 offer at the moment. And that includes teen/young adult books, which I am currently devouring and of which I have read many first books of trilogies.
And then, The Company decided to give us their annual token of appreciation and bump up the staff discount for two weeks.
And I had a coupon where I could save £5 if I spent £20 or more in one transaction.
Now, three books wouldn't cost so much, but six would.
In the end, I saved more than I spent and got six lovely books for just under £20, when the full price would be over £45. A job well done, I feel.
So, added to my collection are
Torment by Lauren Kate, sequel to Fallen.
Crescendo by Becca Fitzpatrick, sequel to Hush, Hush.
Catching Fire and Mockingjay, books two and three in the Hunger Games trilogy by Suzanne Collins.
The Sky is Everywhere by Jandy Nelson, and
Clockwork Angel by Cassandra Clare, who I have concluded is the same Cassandra Claire responsible for the Very Secret Diaries, an amusing piece of Lord of the Rings fanfiction which kept my friends and me entertained in my sixth form years. (Killed by Orcs. Stupid Orcs.) 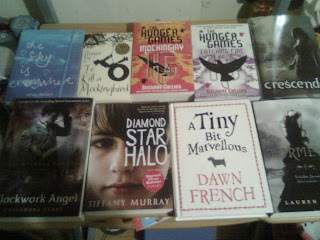 Left over from last week I still have Dawn French's A Tiny Bit Marvellous,
Diamond Star Halo by Tiffany Murray and the classic,
To Kill A Mockingbird.
I ought to impose a ban on myself now: no new books until the end of the month or until I've paid my credit card bill off in full. Money is running out fast and Christmas is coming. (Let's see how long I can last.)
Posted by Katie Edwards at 10:36