A Gate At The Stairs, Lorrie Moore

Twenty-year-old Tassie Keltjin yearns to escape her provincial home. She moves to the college town of Troy to start university and takes a job as a part-time nanny to a glamorous couple. Tassie is drawn into their life and that of their newly adopted toddler. As the household reveals its complications, Tassie is forced out of her naivety, and the past and the future burst forth in dramatic and shocking ways. 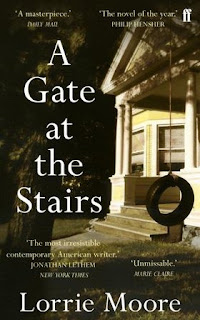 I’d had my eye on this book for quite a while, after seeing it on a display stand for some literary award or other. I’d read passages at random, and was intrigued enough to eventually buy a copy. The reviews on the front and back covers declared it to be “the novel of the year” and the author to be “one of the very best American writers working today.” Sometimes you read a popular book and disagree with the general consensus. For me, A Gate at the Stairs left me wondering not only whether I was reading the same book as the blurb-writers and award panel, but whether I was reading the same book every time I picked it up.
Right from the start I found it difficult to concentrate on this book for more than a few pages. Maybe it didn’t help that I came to this book with its six long chapters stuffed with description, from Poppy Shakespeare which was written in London colloquial language, quickly-flowing with chapters of only a few pages. But what really kept me from enjoying the book was its incessantly bleak atmosphere. First of all I likened the writing style to that of Dickens, where you really felt the griminess. There was a sense of foreboding from the start, where little things that weren’t quite right, like the absence of the adoptive father through many important processes, or Tassie’s college roommate who seemed to have vanished off the face of the earth. Tassie’s employer Sarah seemed a very unlikely adoptive mother. Like a wealthy Victorian mother, it seemed as though she employed Tassie in order to ensure that she saw as little of the child, Mary-Emma better known as Emmie, as possible, which led to me wondering why she was adopting at all.
But there wasn’t the natural humour of Dickens. Moore attempted regular jokes and wordplay, but they felt forced and uncomfortable. A writer, especially a literary author, sets the work’s tone by the description. Moore, through her narrator Tassie, regularly commented on the ugliness of nature, or neutral nature in ugly terms, with special mentions of dead birds and squirrels, and the amount of mould throughout the novel verged on the ridiculous. Added to this, I never sensed I could know the characters. Not only did Moore emphasise the “phoniness” of people, but they seemed to change, not by character development, but as if they were arbitrarily replaced by people with the same name and different personality. All in all, I found that a sense of depression and hopelessness pervaded the novel, and did not want to live in Tassie’s world. To quote my sister when describing a gloomy train guard, Tassie’s world sounded like “the worst place imaginable, where the sun never shines and everyone is dead.”

Not a lot happened, plot-wise, for the first two thirds of the novel, and when plot did begin, it was very disjointed and unlikely. One criticism you can’t make of this book is predictability. Of the three major, dramatic plot twists, two came without any warning, out of the blue and then ended just as abruptly. The third involved Tassie’s family, who were featured briefly at the beginning and then, again briefly, about halfway through, as if Moore had forgotten all about them, before playing their crucial part in the last few pages of the book. And when the story happened, it happened all at once and was so melodramatic and relentlessly miserable that I revised my description of the work from "Dickens without the natural humour" to "Hardy - Jude The Obscure era."

Aside from the story, it also felt as though Moore was trying to tackle some major issues: race, parenting, family, identity and politics, but despite sometimes almost putting in arrows to say “Look! This is an important issue!” and having some scenes of unlabelled dialogue reeling off snippets of opinion, these were never really explored enough to call them “themes.” I found myself at a loss as to what Moore was trying to say, which wouldn’t have been as much of a problem if this was a story-based book. But story, here, takes a back seat amongst the issue-highlighting and the mould.