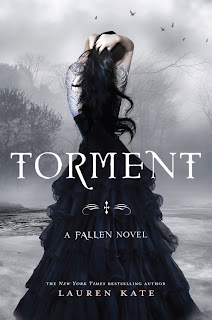 Daniel has whisked Luce away from her old reform school, Sword and Cross, and hidden her at Shoreline, a new boarding school in California which couldn’t be more unlike the last. Where Sword and Cross was bleak, grey and miserable, Shoreline is more like a summer holiday resort, fresh and modern and sunny. There are special classes for those students descended from angels – a sort of celestial Hogwarts! – while to the unknowing it is simply a very exclusive private school. I found the strong point of Fallen to be the school-story scene setting, the friendships and the gothic atmosphere. Although less memorable than Sword and Cross, I enjoyed reading more of the set-up and meeting new characters, especially Luce’s roommate, the irritable Shelby. On the other hand, Luce’s other new girl friends, Dawn and Jasmine, who swoon over her as though she were a celebrity, almost gave me a headache with their shrill hysteria, and this was from reading about them on the page!
After reading Hush, Hush and Crescendo, which I found to be somewhat insipid, I’m glad to see that Lauren Kate’s mythology has something behind it to identify it as being about angels and demons (rather than Interchangeable Magic Boyfriend Creature whose defining feature is that "wings are a neat idea.") Although it isn’t consistent with my understanding which is that there are either angels which are good, demons which are the same as fallen angels, no middle ground, this is Lauren Kate’s story, not mine, and she’s clearly put a lot of work into establishing a fantastical world. All the same, there seem to be a few inconsistencies or things that just feel like cheating. For one thing, there is the whole “You and I aren’t so different after all,” message between angel and demon which goes against their being the forces of good and evil – a conflict which indicates that Lauren Kate has drawn inspiration from Milton’s Paradise Lost. "Or at least the CliffsNotes."

We see a return of the shadows which have plagued Luce since her childhood, which have been revealed to be messengers for dark forces, called Announcers. Now, it seems that if you can hold onto them and stretch them about, they become magic TV screen/crystal balls which show you scenes from the past, which also double as a kind of spatio-temporal hyperlink.* I was reminded of my own juvenile attempts at writing fantasy where I made the rules up as I went along.

In Fallen, I found myself irritated by Luce’s insistence of her twoo wuv for Daniel which seemed to be without any foundation except the discovery that she is his reincarnated soul mate, and that they always end up together (before she dies.) I put enough distance between me and Fallen to forget the details of why their “inexplicable connection” and subsequent “relationship” annoyed me, and this time around was able to take Luce’s word for it. They’re in love, they’re soul mates, yeah, whatever, if you say so. I still wasn’t convinced, but this time around at least Kate didn’t constantly rub my face in it.

Torment is that obligatory Volume Two of many Magic Boyfriend Creature romances where the couple are parted – for the girl’s own good, of course – and the boy acts mysterious and won’t tell the girl anything. It happened in the Twilight books and Crescendo, and here it happens again. I was glad to see that Luce didn’t waste too much time moping, however, but was proactive, questioning what she’s been told by Daniel about their past together, and trying to find out the truth for herself instead of blindly accepting everything he has to say.  Also, by this time some of the initial dizziness of first romance - at least, Luce’s first romance where the boyfriend didn’t spontaneously combust on their first kiss! – has worn off, we find Luce identifying some of the traits of the modern YA Interchangeable Magic Boyfriend Creature (IMBC) Romance genre which are so worrying as a relationship model for teenagers: that the IMBC boyfriend has to know and control his girlfriend’s every move, but keeps his own a secret. Luce even finds herself wishing that Daniel is more like her new crush Miles (Yes, here goes another love triangle! Make up your mind, girl!)


“This was exactly the kind of goofy, teasing rapport she would love to have with Daniel. If only he weren’t so brooding all the time. If he were actually around.”

If, in short, he wasn’t Daniel at all. For a moment, I wondered if this would be the IMBC romance where the girl might realise that she’s in love with the idea of the IMBC more than the guy himself, and make her choice based on reasons other than fate/inexplicable connection/magic/he wants my blood [delete as appropriate.] Just for a moment.

Another three-star rating, but with less polar extremes than Fallen: it isn’t as good as the best of the former, but it’s not as bad as the worst. A lot better than I had expected.