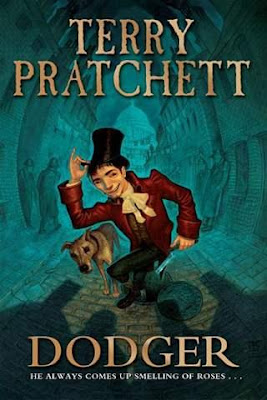 It has long been suspected that although his books are universally classified as “comic fantasy,” Sir Terry Pratchett doesn’t really write fantasy at all. Sure, the majority of his literary output takes place on a flat world, carried through space on the backs of four humongous elephants, who in turn are supported by the gigantic turtle named the Great A’Tuin. And certainly this world is populated with witches and wizards, vampires, werewolves and zombies, trolls and dwarves and blue-skinned six-inch-high warriors. But all that is merely set-dressing. Over the years, the Discworld books have evolved from parodies of fantasy, to fantasy as parody of everything else, to satirical fiction that uses fantastical elements as a lens to view our own society.

When I watched the TV adaptations of Hogfather and Going Postal, I was reminded of nothing so much as the BBC series of Charles Dickens’ Bleak House and Little Dorrit. Perhaps this was in part because Ankh-Morpork had been designed to resemble Victorian London, all ricketty and grimy, and perhaps some shared actors helped (Claire Foy and Charles Dance, for example.) But I came to realise that it was not just the TV adaptations that had a similar style, but the works upon which they were based. Pratchett and Dickens make use of humour and caricature to challenge their readers to think about the ridiculousness of life, silliness to make a serious point.

So when Terry Pratchett brought out a novel set far away from the Discworld, in Charles Dickens’ London, the two worlds joined together seamlessly. Pratchett’s Dodger is not, as I first thought, Oliver Twist from the point of view of the more interesting semi-antagonist, nor a prequel. Instead, despite the shared nickname and outfit, Dodger charts the changing fortunes of another young urchin, a kind-hearted but streetwise lad who earns a living as a “tosher,” scavenging in London’s intensive sewer system. This Dodger has a strict personal morality, even if it doesn’t always necessarily match up with the law, and when he rescues a young woman from a savage beating, his destiny takes a detour and he finds himself mixing with some quite surprising characters from London’s myth and history. “Mister Charlie” Dickens himself plays a significant role in the story, and we see that Dodger influenced some of Dickens’ own writing. I repeat, this Dodger is not Dickens’ Jack Dawkins, but we can infer that he influenced some elements of Mister Charlie’s Artful - a subtlety that perhaps only a master writer like Pratchett could convey.

There are never any doubts over the authorship of this book - you can see that Ankh-Morpork owes a lot to Victorian London, especially now that it is well-established in the Discworld’s industrial revolution. And you really don’t miss the fantasy elements - as I said before, these are mere setting details for Pratchett’s explorations of humanity (even when this humanity refers to trolls, dwarfs and goblins.) London is a fascinating city, both above ground and beneath it, as stuffed with strangeness as anything you could make up. My curiosity, first piqued by Neil Gaiman’s Neverwhere, was tantalised and has been inspired to read more non-fiction about the secrets of the city.

I was strongly reminded of Pratchett and Gaiman’s friendship and collaboration on Good Omens, more than anything else either author has written in the twenty-odd years since. As well as the appearance of the surname Device in a bonus scene,* I noted a paraphrase of one of the few lines in Good Omens whose author I was sure I could identify. (I would have said it was absolutely a Neil line.) And Pratchett made reference to a curious brass bedstead found in the sewers. I last met this bed in the preface to Neverwhere. Truth really is stranger than fiction.