How to Build A Girl readalong: Part one 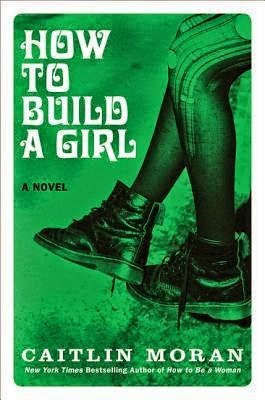 So, today marks the first update post for the How To Build A Girl readalong! Hello to you all.

The novel starts memorably, to say the least! I read Part One on the train, and found myself glancing behind me to check no curious fellow passengers were reading over my shoulder.

Moran writes about young female sexuality in as frank and unabashed a manner as I don't, and shames me a bit for blushing. The subject is tackled in a very matter-of-fact way, not to shock or titillate or giggle, but simply to challenge taboos or double standards. So go Caitlin.

So our heroine, Johanna, is fourteen years old and part of a big, dysfunctional family. Her mum is suffering from post-natal depression after the birth of "Unexpected Twins," and the father receives disability benefits and is convinced he's going to be the next great rock star. It seems quite clear that his idea of his own talent is somewhat delusional - the description of his demo cassette makes it sound arty and weird and terrible.

When Johanna accidentally lets slip to an elderly neighbour that her dad receives benefits, the sniffy reaction - very much a "he doesn't look like there's anything wrong with him... why, I saw him cleaning his car just last week" - makes her terrified that the neighbour will report the family and all the family's support will be taken away. A child should not have to worry about this sort of thing. This novel may be set at the back end of the Thatcher years, and yet nothing has changed. There is a passage describing how Johanna's father will play up his disability because "people have different perceptions of what disability is." A cursory glance at Caitlin Moran's Twitter feed will show how this is a subject close to her heart, with statistics of thousands of people dying after being declared "fit for work." She treats the subject with elements of humour, but underneath it is a real sadness and anger that the most vulnerable members of society are those hit the hardest.

After her gaffe and weeks of terror, Johanna tries to make some money with her writing, enters and wins a poetry competition. As well as the prize money, she appears on live TV and, as one might expect, proceeds to humiliate herself with a Scooby-Doo impression. It makes sense in context... but is by no means anything resembling a good idea in anyone's mind ever. Oh, the awkwardness of being a teenager, of saying something that seems funny at the time. (If only it was limited to the teenage years!) Moran captures that embarrassment so well, that feeling that the whole world is pointing and laughing and will never grow tired of doing so.

"We lie in the shallow depression her ghost left behind," I sometimes think, in my more maudlin moments. "I am born into a nest of death."

Today, like every other day, I'm going to bed still a fat virgin who writes their diary in a series of imaginary letters to sexy Gilbert Blythe from Anne of Green Gables."*


*Of course any Anne references count as key quotes.
Posted by Katie Edwards at 21:02

Labels: caitlin moran, how to build a girl, readalong