How To Build A Girl readalong: Part two

This readalong has been organised by Emily at As The Crowe Flies (and Reads.) 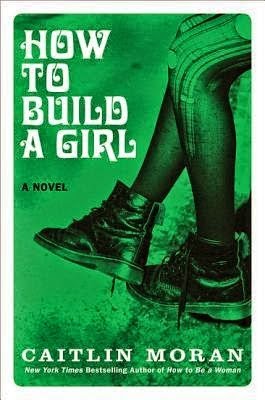 Part one of How To Build A Girl ends on a very melodramatic note. After embarrassing herself on live TV, Johanna Morrigan dolefully concludes: "There are no two ways about it: I am going to have to die." Dun dun DAAAH! In part two, she is swift to clarify matters. She's not actually going to commit suicide. "I don't want to not live. I just don't want to be me any more. Everything I am is not working."

Oh man! As fiction it reads quite lightly, an amusing anti-climax: okay, I said I'm going to die but I don't actually mean die. However, it speaks to a feeling that comes right from the gut, a dissatisfaction I know all too well, and I am twice Johanna's age.

Instead, Johanna goes about reinventing her image as the dark and mysterious Dolly Wilde, named after a scandalous niece of Oscar. I'm not sure how one can use the name Dolly nowadays without bringing to mind a very specific Dolly! But Johanna, or Dolly, takes this transformation very seriously, and I really enjoyed reading about her inspiration collage on her wall. It's the sort of thing I'd have done at that age, though I was always dissatisfied with the results - they never looked as cool as the things my friends from real life, film and TV would come up with. "Dolly" is a very deliberate, studied effort at constructing a new personality, as the book's title implies. I think we all do that to a certain extent, according to where we are. Am I the earnest book-lover on a quest for knowledge, or the out-and-out geek girl? Yes.

So Johanna decides to become a music journalist - only problem being that she doesn't know a thing about music. Not that this stops her! I felt her awkwardness as she tried to get into her goth cousin's group, or browse a non-HMV record shop which seems as girl-friendly as the comic book store of The Big Bang Theory. I remember how as a teenager, your music tastes defined you, marked you out as cool or not. (Confession: I was obsessed with Boyzone.) Actually, in my experience I felt far more accepted among the goths and skaters than I did among the "ordinary" kids at school, even at fourteen, and the Hobbit in Southampton was the first pub I ever felt comfortable in.

Still, Johanna is nothing if not determined, and builds up her music knowledge with records ordered from the library and listening to John Peel on the radio, and eventually walks into the coveted job at the age of sixteen, with no qualifications.

We finally find out about Johanna's dad's disability - he was seriously injured in his work as a fireman. I wonder if Moran deliberately delayed telling us the details to challenge our reactions: though I fought against it, I did catch a treacherous thought crossing my mind: "so he's heroically disabled, that's all right then." PEOPLE ARE PEOPLE, PEOPLE! How does one earn one's right to be "deserving" poor, anyway? (Possibly not through drink-driving. These scenes made me very nervous.)

Johanna began her writing career as a means to "save" her family from poverty and disrepute, and yet even this early on I can see her getting caught up in her work and losing sight of her noble aims. Perhaps it's not surprising - she is sixteen, and probably every sixteen-year-old wants to put distance between themselves and their parents. I was cringing on her behalf when her drunken father came backstage to meet the Smashing Pumpkins with her. But I can see this independence becoming a huge source of conflict later on.


I am my own imaginary friend.

Sometimes, and suddenly, these barrages of me-excluding noise part to reveal things I find astonishingly beautiful, and useful to me and my heart, in their current position.

We are not just poor people who have not yet evolved into something else: i.e.: people with money. We are something else - just as we are.

I can see where I have drawn Dolly Wilde on top of my own face - the two uneasily co-existing - but perhaps others can't.