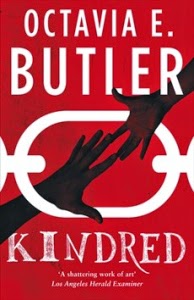 Time travel takes many forms in fiction. There are time machines which allow you some control over your destination, whether they take the format of police telephone boxes or DeLoreans; Stephen King's time portal was the pantry of a diner which always sends you back to the same place and time, always setting the timeline back to how it was supposed to be (or does it...?) Then there is time travel that leaves you at its mercy, sending you here and there in space and time as it sees fit, as in The Time Traveller's Wife. Octavia Butler's time travel affects her protagonist, Dana, in this way. Except that she is a young black woman living in the nineteen seventies, and her time-travelling is tied into the life of Rufus Weylin, who is the son of a plantation owner in Maryland of the early nineteenth century. Dana's trips to the past are unpredictable and dangerous, and she finds herself having to make unthinkable compromises in order to survive that hostile time.


"You might be able to go through this whole experience as an observer," I said, "I can understand that because most of the time, I'm still an observer. It's protection. It's nineteen seventy-six shielding and cushioning eighteen nineteen for me. But now and then, like with the kids' game, I can't maintain the distance. I'm drawn all the way into eighteen nineteen, and I don't know what to do."

It was curious; although I am very familiar with time travel stories, it was while reading Kindred that I realised how different the past can be. Then was then, now is now, but through Dana's eyes I had a sense of the two eras existing simultaneously, like two pictures drawn on tracing paper and placed one over the other. And it is a very jarring experience. Most historical or time-travel fiction persuades me that people don't change, that they may hold different views but that people are basically the same wherever and whenever you go. This is probably because I approach these narratives from a white point of view. Seeing slavery first-hand from Dana's point of view, I found myself questioning this. What kind of human being could ever think slavery was okay?! Dana tries so hard to influence Rufus when she meets him as a boy, to question the values he learns from his father and the society around him, and for a while she seems to have a certain amount of success. But she meets him as a man, and he has accepted his world as it is. It broke my heart to think maybe it was a losing battle. There is only a limited amount of influence Dana can hold over him while living the life of a slave on his plantation. She can't shake sense into him - any overt attempts to persuade him that he's wrong would result in dire consequences for her.


"He wasn't a monster at all. Just an ordinary man who sometimes did the monstrous things his society said were legal and proper."

I wonder. From twenty-first century England I'd shout YOU KNOW BETTER, RUFUS! IN YOUR HEART, YOU KNOW RIGHT FROM WRONG. At the same time, I found myself questioning myself. Are we born with a conscience, or do we learn it from our social context? Even at my most conservative and suggestible, I could never talk myself into accepting everything I was taught. I like to think that I would be a decent person even if I lived as a white middle-class person in the American South in the 1800s, but I wonder, and part of me is afraid to find out. I hope at a bare minimum I would hang onto the truth Terry Pratchett's witch Granny Weatherwax summarises as "Sin... is when you treat people as things."

In one of Dana's later visits (perhaps "summons" is a better word) to the past, her husband, who is white, comes along with her, and with much her disgust, she goes along with the pretence of being his slave. What shocked me was not so much her agreement to keep up this act, but the way that the life gets into her head. How even a strong, courageous, modern woman like Dana must submit and make compromises in order to survive, all the ways that one group of people will oppress and frighten another group in order to keep them where they want them. Maybe man's inhumanity to man is old news, but it does not stop being shocking. Octavia Butler takes the familiar narrative from history and brings it back to life, reminding the reader of the reality behind the fiction. And looking at the news the internet brings me every day, I fear that history is not as far in the past as people would like to believe. As such, Kindred is a Very Important Book. Go out and buy it.

Many thanks to Alley for encouraging me to think about diversity in my reading, and for your recommendations of Octavia Butler. I will certainly be looking out for more books by this author.
Posted by Katie Edwards at 21:33