Sunday Summary: It's beginning to look a lot like Christmas

Morning all! For the last few years, since I've been working in retail, I haven't exactly been feeling Christmassy until it's too late. I might find myself humming Christmas carols in October (September, August...) as I unpack the festive books, but I get so caught up in the stress of retail-Christmas that I haven't really been able to enjoy the season. This year I seem to have disassociated retail-Christmas with the real thing, being able to keep the two things separate in my mind, and now I am feeling very festive indeed - and there's still a week and a half to go! I hope this lasts.

My day off was Friday this week, and I spent the afternoon decorating our tree and living and dining rooms, while watching Anne of Green Gables. I also picked up a massive parcel from the post office. Some of the UK book bloggers decided to do a Secret Santa this year, and my sender was particularly generous. I'll keep their identity a secret until everyone else has revealed their presents (and I hope it was OK to open my parcel before Christmas day.) But it was someone who knows me well! As well as three books: The Thirteenth Tale, The Rook, and We Should All Be Feminists, I received some chocolate hobnobs - my absolute favourite! - some knitting wool for making cosy winter socks, and a book bag with the instructions to use it for taking my books for a walk. 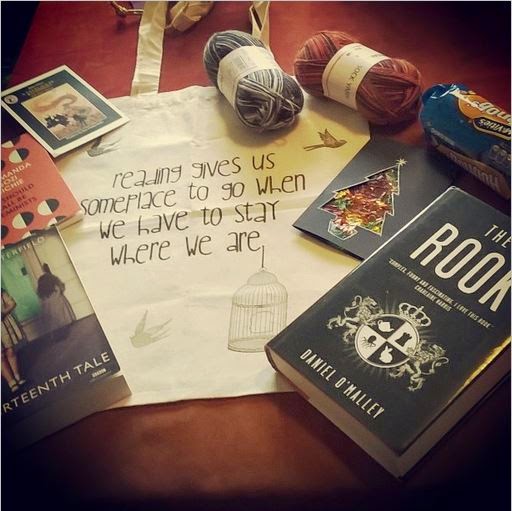 Another thing that has made me feel Christmassy has been when my feet lead me out of work and straight into Costa Coffee, to find a tasty festive hot beverage to keep me company in the cold and dark as I trudge up the hill towards my home. But I've also been experimenting with making my very own deluxe spicey hot chocolate, and as it's Christmas, I'm going to share the recipe with you:

Grate or finely chop the chocolate (so that it melts better). Heat the milk in a saucepan over the hob. When hot but not boiling, add the chocolate and spices, and stir until all melted. Remove cardamom, pour into mug and top with whipped cream and a sprinkling of cinnamon. Et voila! Hot chocolate fit for a king. 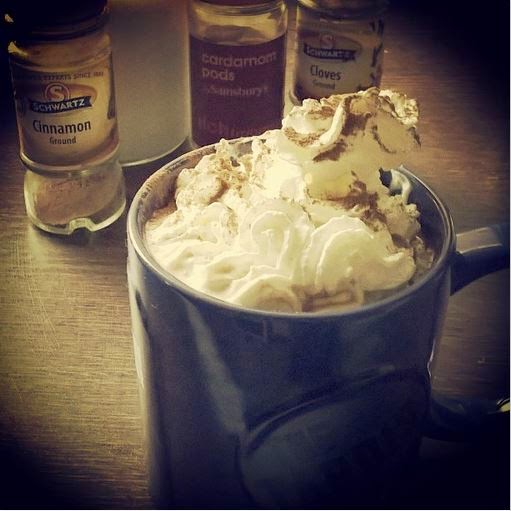 I haven't got a lot of reading done this week, but - against my better judgement - I decided to face up to my childhood fear of clowns and read Stephen King's It. I think King was responsible for the longest book I've read this year, 11.22.63, and It is nearly twice as long. So far I've been intrigued rather than scared, but have only had the merest glimpse of the clown, and I will never ever ever be able to watch any screen adaptation.

On the other end of the scale, a comment on a very old blog post prompted me to think of looking on the Kobo site for a book for which I've been searching for about seventeen years: the final installment of Anne Digby's Trebizon series of girls' school stories. The genre was pretty much extinct by the time the last book came to be published, with a tiny print run, and second hand copies are available for upwards of £40 in paperback. But to my joy, I found Kobo selling it for the same price a children's book would have sold for in the mid 1990s - a mere £2.99. I still can't convince my brain that reading on my phone or any other electronic device is the same activity as reading a book, but it's better than nothing, and I can gladly say I've finished the story, at last.

This week I started playing around with Grandma's old sewing machine, which is now mine. It had been at least fifteen years since I touched a sewing machine, but as I figured out how to thread it up, a lot came back to me from school, and once I'd worked out what to do with the bobbin, it was a lot simpler than it looked. I raided my mum's scrap bag to practice seams, and ended up with a patchwork cushion cover, which is not at all bad for a first try. The seams are mostly pretty straight, and I seem to have learned a bit more control over the machine than I had as a girl. The lovely thing about this cushion is that every bit of fabric has its own memories: the flowery fabric is left over from my mum's favourite dress, the polka dots were from pyjamas, and the navy blue material was a dress when I was very little. 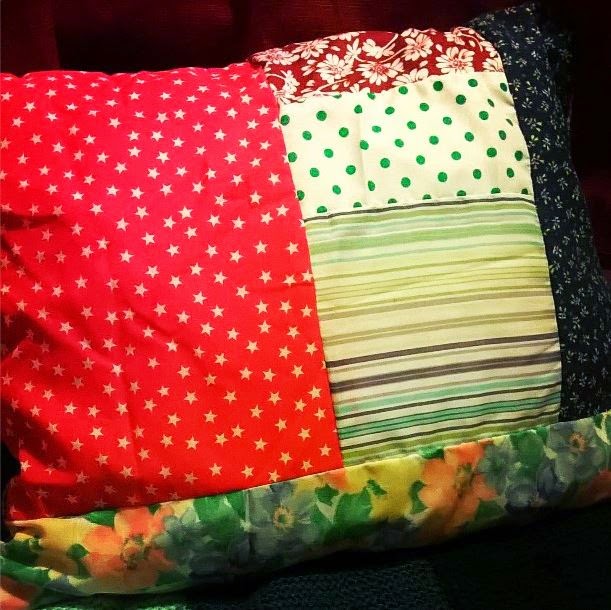