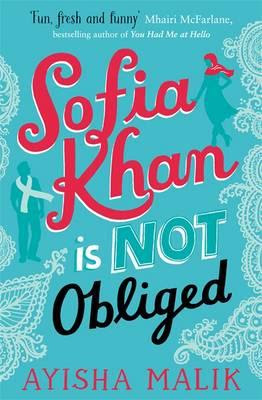 Sofia has recently decided to commit to a life of celibacy. Her sister is due to get married, one of her best friends is about to marry a man who already has another wife, and her family just will not stop badgering her about when it's going to be her turn. But she's just broken up with her boyfriend, who wanted her to move in with his interfering family. One day, after an unfortunate incident on a London Underground train, she finds herself commissioned to write a book about Muslim Dating...

It's unusual to find a protagonist in mainstream fiction these days with a strong religious faith (of any religion.) If you do, it's either downplayed, showing the characters indistinguishable from anyone else but for a few words or rituals. And when religion is explored in depth it tends towards an anguished crisis of faith. And in particular, Islam gets fogged to the outside view by ignorance, misinformation and fear. Sofia Khan Is Not Obliged shows us an insider's view, an ordinary British Muslim whose faith is an integral part of her life. She chooses to wear the hijab (much to the dismay of her mother) and her working life brings its own challenges in finding a quiet place to pray five times a day. She is also loud, stubborn, witty, likeable and intelligent, an occasional smoker and lover of lemon puffs and chocolate hobnobs - a likeable and relatable character.

I picked up Sofia Khan at work when unpacking the new books delivery, and knew after looking through a few pages that I had to buy it. By the time Sofia shouts at a racist about terrorists not wearing vintage shoes, she had become real to me: I could see her, hear her voice, I needed to know her story. Despite her determination to stay single, Sofia ventures out into the dating world for "research" for her book, with its perils and pitfalls. But the most significant relationships come into her life through other means: the American with whom she has a hilarious bantering chemistry, the former fiance returns, and then there is a slower-building friendship that may become something else. Given the genre - the romantic comedy - it's inevitable that Sofia will find love somewhere, but it is not a straight-forward conclusion. Along the way, Sofia falls under pressure to please her family who just want to see her happily married, but is she making the right choices, and if not, how will she know?

Sofia Khan is a cheerful read, and had me giggling every few pages, but also made me feel for her sorrows and dilemmas in her quest to find happiness for her friends and family as well as for herself. She doesn't always make the right decisions, and with mistakes come consequences that are not easily brushed away. Sofia's family might not understand her choices, but what they do have, beneath the bickering and nagging, is love, which shines through the inter-generational conflict, in a wonderfully rounded and believable cast of characters. My only complaint about this book is that one of the promising new friends was written out of the story about halfway through and barely warrants a mention afterwards. But there were so many other great characters to spend the rest of the book with.  I came away from this book feeling as though I'd made a lot of new friends in the Khan family, and in Sofia's closest circle, Hannah, Fozia and Suj, Katie at work, and Conall (not Colin!) the grump next door who has hidden depths.

I'm really excited for Sofia Khan, which I'm hoping will be one of 2016's big debuts. It's been chosen by WH Smith travel stores as part of their Fresh Talent promotion, so this ought to help to make the book one of the big new hits of 2016. I want to get people reading and talking about Ayisha Malik and Sofia Khan, and good news - there is a sequel in the works. I can't wait to see what happens next.

You can read an interview with Ayisha Malik about Sofia Khan at the New Statesman here.
Posted by Katie Edwards at 18:08