Wasn't it just last week that I was bemoaning the lack of hoverboards in "the future" of 2015? And now the future is in the past, and there are things that people will insist on calling hoverboards on sale in Maplins, and causing accidents everywhere and being banned from public places but they are not hoverboards! Give us the real thing or go home, will ya?

Anyway, 2015 is over now, for which I think we're all grateful. It was a pretty rubbish year all round I think. Personally, I think I'm in a better place mentally than I was a year ago; I survived turning 30, continued with my writing, and mostly quit whinging about my life and became content with what I've got, the people, the opportunities, the freedom (and the books.) So there's that to be said for 2015, anyway. But for the most part, I'm glad it's behind us and although I know it's just a date, it's good to have a day to say "the future hasn't been written yet, so make it a good one" once a year.

I haven't made any specific new year's resolutions this year, just to be kind and to continue with my writing, but I have started keeping not one but TWO journals: one is for Ali Edwards' "One Little Word" project - you choose a word and ponder and write/scrapbook/create things about how that word will be significant throughout the year. I chose "Peace." And I've also made a variation of the "happy jar" where you write down good things that have happened and put them into a jar - or in my case, onto my page-a-day colouring calendar, which I stick into another notebook. If at the end of the year I find myself thinking again "nothing's happened," I can look back over all the good things I've done or experienced through the year and prove the opposite. (In theory, anyway...)

Christmas was a good, but quiet one. My sister came home for about ten days, and although I was working all week (the joys of retail!) I still managed to find time in the evenings to relax, watch films, eat lots of food and spend time with family and friends. 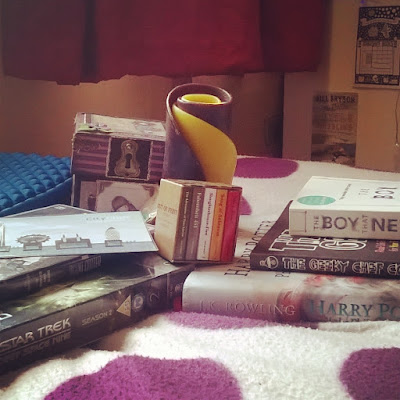 From my parents:
DVDs of Marvel's Agent Carter (which I have been wanting to see ever since I heard it existed, but circumstances conspired against me) and season two of Star Trek: Deep Space 9.
Microwavable slippers! These work when nothing else will to banish cold feet forever!
(Not pictured: a new coat, laptop case, Thornton's chocolate Santa.)

Books: The Boy That Never Was by Karen Perry and The Geeky Chef Cookbook which has recipes for Butterbeer, Lembas, Pan Galactic Gargle Blasters and 1-Up mushroom cupcakes, among many other nerd-culture-inspired recipes. A fancy candle, and a Thunderbird 2 t-shirt. (When I was about 7 I really wanted to be Thunderbird 2 when I grew up. Not fly it. Be it.) 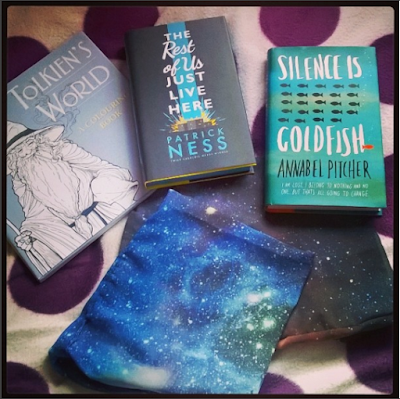 Our little group of bloggers did a Secret Santa again this year, and Hanna sent me some amazing presents: the Tolkien's World colouring book, two YA novels: The Rest of Us Just Live Here by Patrick Ness and Silence is Goldfish by Annabel Pitcher, and an absolutely gorgeous infinity scarf/snood/whatever these joined-up scarves are called with a space pattern on it. I've been wearing that nearly every day since Christmas; I love it! 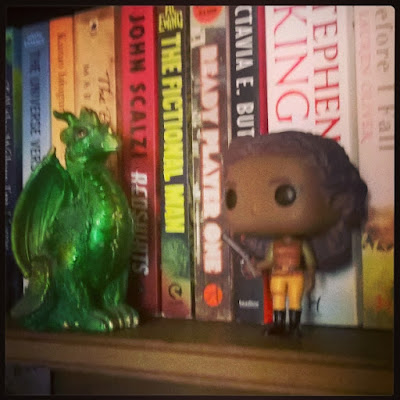 Harry Potter and the Philosopher's Stone - the illustrated edition, from Judith. I think most of my bookish friends have received copies of that this year. It's beautiful! She also got me some presents from the Literary Gift Company: a red tote bag with a quote about paradise being a library, some "Banned Books" matchbooks, a folding out "Gorjuss" photo box, and some amaretto-soaked sultanas from Hotel Chocolat. (These did not last long.) Sammy and her family bought me lots of bath and shower smellies, and two Funko Pop figures: Zoe Washburn from Firefly (taking on a dragon on my bookcase in the picture above) and a mini Eleventh Doctor on a keyring. From my uni friends I got several small things: a box of bookish pencils, a knitting brooch, some bookmarks and a little leaflet filled with writing prompts for coffee shops, which I've tucked into the back pocket of my handbag-notebook so I've got it with me wherever I go.

Now that Christmas and New Year are over, the rest of winter is stretching out long and grey before us (at least, those of us in the Northern Hemisphere.) So, now that things are quietening down, what better than to snuggle up with a big mug of coffee (tea, hot chocolate or other beverage of choice) and a good book? And the Bout of Books readathon returns just in time for that tomorrow. Hurrah! I don't exactly need an excuse to be a book-dwelling hermit, but it's nice to have company (on the internet, not in the room) while doing it. So I'll be eagerly taking part and making my way through my January to-read pile. 4 books in a week is my usual readathon target, and the rest of the pile should take me through to the end of the month (although as always subject to what I feel like reading at the time.) 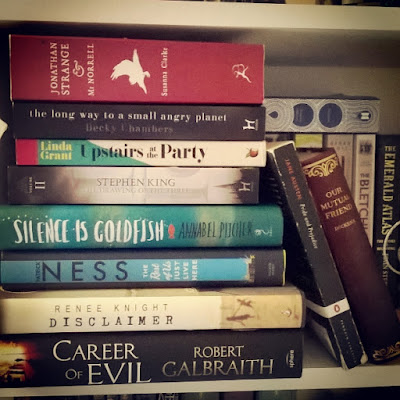