I wrote in my rereadathon wrap-up post that I've spent the end of my holiday in Cardiff and Bath. Although I was only away for four nights, I managed to fit a lot into my time away, catching up with two friends from the Isle of Wight, recording a podcast with one of them, seeing Going Postal in Cardiff, and the trip culminated in the Bath Bookshop Crawl on Saturday. This was another event organised by Bex, following on from the success of the London Bookshop Crawl at the beginning of the year.

The Bath Bookshop Crawl was smaller than the London one, but no less memorable. There were ten of us altogether, which was a good cosy number to get to know each other. We met in a coffee shop by the station for tea or milkshakes, all except for Ellie whose train was delayed. Our first bookshop stop was Good Buy Books, a little discount bookstore on the corner, whose selection might not be huge but had some great bargains and surprising gems. I snapped up a hardback copy of The Time Machine for a good price. Some of us went to explore the nearby wool shop and haberdashery, before regrouping and heading off towards the Guildhall market. Ellie joined us along the way, recognising a small huddle of people laden down with book bags. Bath is a nicely compact city, without too much of a walk between destinations (although I took a long time the previous day to orientate myself. 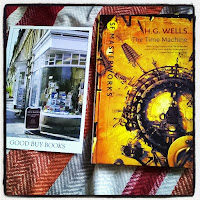 Next up Skoobs (no relation to Skoob Books in London, which is another great bookshop to check out, right by Russell Square tube station.) It was described as a second-hand bookstall in the marketplace, but that doesn't really do it justice; not just a table spread with dog-eared copies of The Da Vinci Code, Skoobs was a decent-sized small bookshop in its own right. There was a lovely selection of books of all genres, bookcases for children's books, fantasy and horror, romance and saga, general fiction - and quite probably a lot of non-fiction too, but I didn't see everything there. But there were a lot of children's books from my childhood and fantasy from my teenage years, all in editions that brought me out in nostalgia - and I finally completed my Malory Towers collection with "my" covers (Well, they all have the same pictures though some are different styles; the Dragon/Armada ones from the late '80s and early '90s.) I also bought The Outsiders, which I'm pretty sure I read as a teenager, but don't quite remember, and which I've found so many references to in the last few months. Several of us huddled round by the sci-fi, fantasy and horror shelves, and I sighed happily over the Dark Moon by Julia Gray, a long-forgotten series that devoured a crucial week or two of study-leave before my A-Levels. I also went off on a bit of a rant about how terrible Stephen King's Dreamcatcher is. Sorry people! 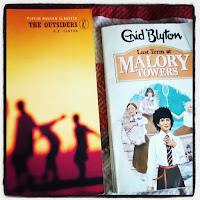 Waterstone's was the biggest bookshop we visited, and it really is a beauty. They very kindly offered us a free lunch, and our scouts emerged from upstairs to tell us that there was a table set for us in the cookery section. One of the booksellers waited on us, giving us real VIP treatment, taking orders for toasted paninis, cakes, and plenty of tea and coffee, even giving us all goody-bags. I was just expecting a plate of triangle sandwiches and maybe a cupcake or two! I think we all felt a bit guilty that they went to so much trouble for us. We are not worthy! (But thank you so much, Waterstone's Bath, you really made it a special experience.) 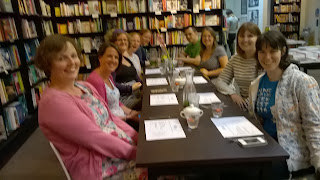 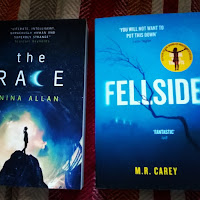 I bought two books: Fellside by M.R. Carey, the author of The Girl With All The Gifts, and The Race by Nina Allan, another book with a figure silhouetted against a starry sky on its cover. (Hey, that worked out well last time! This is apparently a very different kind of book to Small Angry Planet, however.) I also came away with a 99 Things That Bring Me Joy journal, to fill in and keep in my Happy Box. (I don't think I've written about my Happy Box before. Remind me to do a post about it some time.)

Our next stop was Mr B's Emporium of Reading Delights, which is a beautiful and I believe a rather famous bookshop. The decor was beautiful, with a wall of Tintin comics, tote bags on a ceiling, and the downstairs toilet had been decorated/doodled on by artist and illustrator Chris Riddell. In Waterstone's I had more or less decided to put off buying Joe Hill's latest tome The Fireman for another day - it was heavy and quite expensive - but I had no sooner set foot in Mr B's than I discovered they had signed copies for sale. So whoops, onto the pile it went! I also went in search of a book I'd noticed in Cardiff, The Fair Fight about lady boxers in the eighteenth or nineteenth century, which has been compared to and has a blurb by Sarah Waters - always a promising sign. 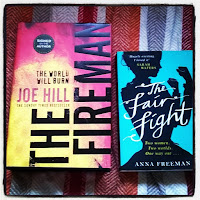 Our final bookshop was Topping and Company, just around the corner, a proper, elegant old-fashioned kind of bookshop, with high shelves with those long ladders that every book-loving little girl dreams of. There was a table full of hardback fiction, many signed first editions, with protective plastic covers. I only had enough money for one more book and was torn between The Essex Serpent and The Muse, before finally settling on the latter, because I'd really liked Jessie Burton's previous offering The Miniaturist. We were offered tea and biscuits while browsing; I'm not sure if that was a special bookshop crawl thing or whether all shoppers get to have afternoon tea as part of the Topping experience. We were all rather weary by that point and glad to have a sit down and put down our heavy tote bags for a while. 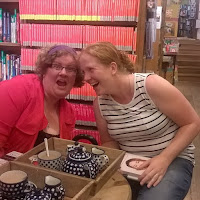 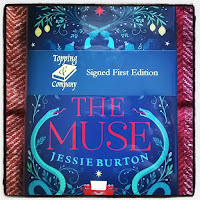 We had one other shop on the itinerary, American Dream comics, but by the time we got there, it was about five minutes before closing time. The shop was quite a small one, with plenty of comics and Pop Vinyl figures. I don't read a lot of comics or graphic novels, and there wasn't time to have a good old browse. I did look for a Holtzmann figure from the new Ghostbusters film, but alas, I have not yet been able to find her. 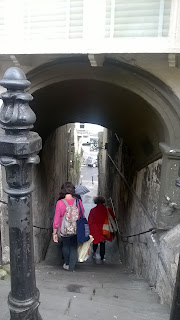 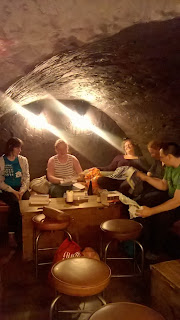 Some of our number went home at that point, but six of us went over to the pub where my friend James, one of my fellow "People Under The Stairs" from high school, works. I'd met up with him the previous day, and we'd gone out for drinks - and I added him to the list of people I'd introduced to The Long Way to a Small Angry Planet. (That makes six that I know of.) The bar was busy, it being a Saturday night, but James was able to pop out of the kitchen briefly to say hello. We ordered drinks and food, and counted up our combined purchases. There were about 40 between the six of us, and I made it 76 altogether, a not-too-shabby contribution to the Bath bookselling economy.
Posted by Katie Edwards at 20:16