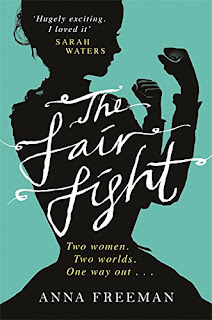 It is the end of the eighteenth century, around the same time that Jane Austen was writing of Elizabeth Bennet and Mr Darcy. Down in Bristol, three people are living very different lives. Ruth Webber was born and brought up in a brothel, but was offered an alternative life at a young age: to box at the local tavern and later on, at the fair. Charlotte Dryer, nee Sinclair, survivor of the smallpox that killed all her family except for her and her abusive brother Perry, is trapped in a loveless and lonely marriage. Meanwhile, George Bowden, the bisexual youngest son of minor gentry, is a lovable scoundrel looking to make an honest - or dishonest -living the best way he can. The three lives come together one evening, the night of Ruth's fight at the Bristol fair...

I found it really fascinating to learn through this novel about women in Regency England who defied the gender norms and took to prize-fighting on a stage. It is such a shocking, violent life when set beside Jane Austen's world of balls and courtships. So it's rather a shame that the book only focuses on that particular aspect for part of the story; Ruth's patron, Granville Dryer soon switches his attentions to training up her gentle giant husband Tom, instead. But the women's fights are not confined only to the stage; for both Ruth and Charlotte, under very different circumstances, every day brings its own battles.

Ruth was the richest character, the strongest voice. Her narrative is full of 18th century Bristolian slang; men are "cullies," babies are "babbers," to fight is to "mill," and to punch is to "fib." She is a most unladylike woman, shocking everyone she comes into contact with by her rough and aggressive manner. She is a fighter. But when she forms attachments, she is just as fierce in her loyalty.

Charlotte, by contrast, appears to be a proper lady, but she burns with an inner fire in need of an outlet. She is desperate to rebel against her repressive life. Her husband, Granville, is a thoroughly contemptible character. He is not a bully like Perry Sinclair, Charlotte's drunken brother, but he is unforgivably selfish and heedless of others. He values other people as far as they are useful or entertaining, but when that is no longer true, they just cease to exist for him.

I thought that the third narrator, George's story was the weakest part of an otherwise well-plotted and gripping novel. It starts off well, but seems to be dropped partway through, and when it resumes, although his actions do affect the other two story strands, his thread is not so tightly woven in as the rest of the book.

The Fair Fight is an exciting, punchy page-turner, with characters you grow to love (except for those you have to hate.) It shows a different side to a popular era in historical fiction, celebrating women who broke away from gender expectations at a time when a woman's role was seemingly fixed in place. An excellent read, I thoroughly enjoyed it.
Posted by Katie Edwards at 21:15