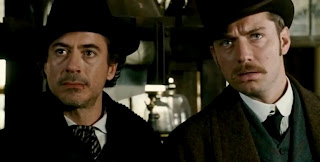 After finally getting reintroduced to Sherlock Holmes thanks to Steven Moffat's recent series, and having my prejudices surrounding the character and the stories challenged, I decided to rent the DVD of the film that I was so quick to pooh-pooh on my first impression, from a two-minute trailer in the cinema.

After such a good version on the TV over the last three weeks, perhaps the recent film didn't really stand much of a chance in my opinion, but I will be fair: it was a lot better than I had expected, and a pretty good period-action-adventure film. Unfortunately, I still wasn't quite convinced by Robert Downey Jr. as the title character. To me he came across as inconsistantly Holmes-ish, and as the film went along the Holmes-ish moments became longer and more frequent, but he wasn't actually Holmes to me. My impression was that he was trying too hard. His accent, his mannerisms, came across as a little too forced and unnatural, instead of the carelessly deadpan snarker, he came across as a smartass, as well as a bit clumsy and clownish. He did very well when Holmes was being more serious or showing off his "Holmes Clevers" but in other scenes I wasn't convinced. It's not that I objected to the action scenes when I came to watch the film itself (having been re-educated on the nature of the Holmes stories) but the way they were executed left me cold.

Jude Law as Dr Watson, on the other hand, was perfect. I find Law one of the more distinctive actors around at the moment and yet in this film I was able to forget he was Jude Law and just see Doctor Watson. Unlike the TV Series, which focuses on Holmes and Watson's first meeting and cases, these two have been working together for a long time and have an easy, bantering relationship. 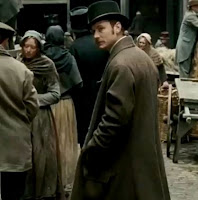 The setting and atmosphere of the drama were well done, tension built by various uses of sound and lighting, and there were moments, while less "arty" than the TV series, that were effective in showing slow flashbacks to see Holmes's workings-out. The film begins in the middle of the action, as Holmes and Watson go after the villain, and yet it took me longer to be engaged than in the more thoughtful beginning of Sherlock. The plot itself was satisfactory, but a little weak and quite improbable. That in itself itself wouldn't have caused me to dock points - I am currently reading A Study in Scarlet which has moments which are probably almost as silly, but which can be excused by the time of writing. The climax in the Houses of Parliament, however, was too large-scale to be credible.
Although the film-makers did a wonderful job of scene-setting, almost certainly using plenty of CGI to get some pretty marvellous landscapes of Victorian London, the film felt more like a period drama by a modern author than the TV series, which although set in the present day, captures the spirit of the original.
Posted by Katie Edwards at 00:00