The Book of Tomorrow, Cecelia Ahern 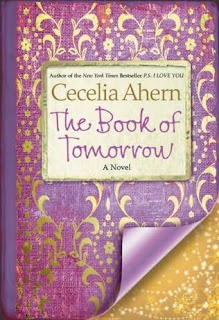 Cecelia Ahern is best-known for her romantic tear-jerker, P.S. I Love You, which was made into a film starring Hilary Swank and Gerard Butler. I enjoyed the book, well enough, and also the film, but they were what I classed as Chick Lit, a genre I tend to investigate about once a year. The pastel covers of her other books did nothing to rid me of this impression, and although some of them were pretty, I didn't bother with them.
Then The Book of Tomorrow appeared on the shelves, and what a beautiful book! I am an incurable cover-judger, and this elegant purple volume with its glorious golden shinies could not keep me away. But enough of the swooning, onto the story.

When spoilt Tamara Goodwin's father dies, leaving her and her mother bankrupt, she has to leave her Dublin mansion and move to the middle of nowhere, to live under the watchful eye of her aunt Rosaleen and uncle Arthur. Tamara's mother, catatonic with grief, is confined to her room, and Rosaleen is twitchy and constantly checking up on Tamara. But is she being overprotective of Tamara, Mrs Goodwin, or of her own secrets? With nothing else to do, Tamara explores the ruins of the nearby castle, befriends a bee-keeping nun, and discovers a mysterious journal, whose entries are written in her handwriting, dated the following day, and describing events which have not yet happened.

On my second reading of The Book of Tomorrow, I felt that it would be a good companion novel to Lauren Oliver's Before I Fall. Like the latter, it shows two alternative versions of a day, depending on the choices made by the individual. Tamara feels full of guilt that the last time she saw her father they had fought bitterly, and she wishes she could recall her final words to him. The diary's offering of a glimpse into the future offers her insight into the consequences of her actions, and turns her from a thoroughly unpleasant little madam into the more thoughtful and considerate young lady who narrates the story. The Book of Tomorrow is filed in adult fiction in the bookshops, perhaps containing stronger language than you'd find in most teenage novels, but with a sixteen-year-old protagonist, I don't think it holds anything new to readers of the same generation. The setting, tone and mystery of the novel took me back to my own teens, reminding me of some of the best children's and young adult novels, compulsive, with a sense of adventure and a setting I really wanted to explore. I particularly loved the character of Sister Ignatius, the wise old nun with a sense of humour, who refused to get offended by Tamara, despite her best efforts. My favourite scene depicts Sister Ignatius and her fellow nuns avidly discussing a Mills and Boon novel as if it were great, or at least good, literature.
I have since read one or two more of Ahern's novels, but this is, for me, easily her best so far. One of my great discoveries of last year.