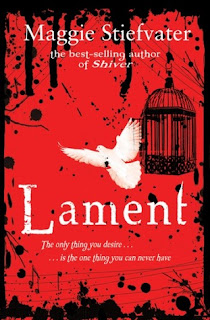 Lament is the first novel from Maggie Stiefvater, author of Shiver and its sequel Linger, but it has only been published in the UK this year. The story is familiar to a connoisseur of teen fantasy fiction. Teenage girl starts a romance with a strange and handsome boy, only to discover that there's more to her new boyfriend -and the world - than meets the eye. Her new boyfriend has a dark and dangerous past that is catching him up and the teenage girl finds that a lot of people want to kill her. Stripped down to the basic plot outline, this could be Hush, Hush, or Twilight or one of many other dark fantasy romances. It might have been vampires, or angels, or werewolves. In this case it's the fair folk - the faeries.
The power of Lament is in the details. Ms Stiefvater writes with humour and lyrical prose which is highlighted by the theme of music throughout the novel. Heroine Deirdre is a skilled harpist, and it seems that her musical genius is more than just a talent. Dee is a "cloverhand" - one who can see faeries, and who has some magical, psychic abilities of her own. Music is no earthly art here.
I found that the first half of the book read as a fairly generic teen novel with an Interchangeable Magical Boyfriend Creature, and the platonic childhood best friend of the opposite sex who could be the third corner of a potential love triangle. As is often the way, I felt more inclined to wish for James the Best Friend to win Dee's heart rather than the more glamorous, troubled Luke with his faerie background.

I was rather taken aback that after Dee discovered the details of Luke's terrible past, she seemed more concerned that he had expressed his love for her than that he had been sent to assassinate her! After her initial anger, I thought Dee was too forgiving too soon, but it is to Ms Stiefvater's credit that she evoked sympathy for the couple even if I rolled my eyes a little.

Despite his otherworldly ways, uncanny knowledge of Dee's life and his habit of calling her "pretty girl," Luke is - or was once - human. When we get to meet the fair folk themselves, the book seemed to shift from YA "paranormal romance" to a more traditional, mythical fantasy genre. The fair folk are not interchangeable with the un-vampiric vampires and fallen angels that are in many books; these are definitely the faeries of old: amoral and fascinated by the humans with their funny notions of good and evil. They are majestic, dangerous, very inhuman and mischievous - from an era long ago when the word "mischief" had far more sinister connotations than it does now. These faeries are of the race of Oberon and Titania, whose quarrels put nature in turmoil. When I was at university much of my creative writing was influenced by the tales of the fair folk of old - not Tinker Bell and the cute little pixies that people tend to think of when they hear the word "fairies." Maggie Stiefvater's fair folk were of the same sort, and so well-written that I half wondered if the author had faerie blood herself, or was a cloverhand like Dee. Certainly she seems to be able to create any kind of art she tries her hand at: creative writing, painting and music.

Lament is a powerful, enchanting novel that, like the four-leaf clovers that play their part in awakening Dee's powers, opens the reader's eyes to that beautiful, deadly other realm.

If you enjoyed this, you might like:
The Bitterbynde trilogy by Cecelia Dart-Thornton
Ash by Malinda Lo
Posted by Katie Edwards at 22:02