The Girl From Away trilogy, Claire Mowat 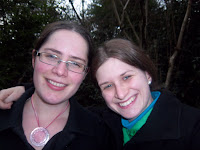 There are some people who are, as Anne Shirley would put it, true "kindred spirits." These are the people you can travel with, go for coffee or even lunch with, and completely ignore each other while you are both engrossed in books. Most people would probably think this weird and unsociable, but my closest friends understand completely. I've known my best friend, Judith, for as long as I can remember, and like me she is a complete bookworm. We've been on holiday and on day trips up and down the country, but our favourite finds when shopping are the bookshops, from big chain stores to teeny-tiny second-hand shops. So when she recently went on holiday to Canada, it is only natural that the souvenirs she brought back for me included books. The Girl From Away trilogy was a tatty old ex-library book with stamps, old-fashioned ticket pocket and the opening times of the local swimming pool still visible in light pencil. I love a book that's picked up some history along the way, and especially one that has crossed the Atlantic.
The Girl From Away

The Girl From Away introduces Andrea, a teenage Toronto girl who pays an unwilling visit to Anderson's Arm, a small fishing community in Newfoundland, while having to come to terms with her mother's remarriage. Andrea spends the Christmas holidays with her aunt Pearl and cousins - her uncle Cyril is away working on an oil tanker, and though they remain cheerful, Pearl and her children are clearly anxious about him. The Girl From Away is a lovely portrait of a small community, where everybody knows everyone else and pulls together in a crisis. The setting came vividly to life, and felt identifiably Canadian. The three-in-one edition of the book was published in 2002, but I recognised the stories as being originally written earlier, in the 1990s. There were details that felt old-fashioned, but yet not so much so that they were strange to me. Most noticable was the personal cassette player that was Andrea's birthday present, and the story itself was reminiscent of the books I read when I was a child.

Book two of the trilogy sees Andrea back with her cousins, aunt and uncle - now safely home. A trip to collect Uncle Cyril's fishing boat finds Cyril, Andrea and the Cousins at St Pierre and Miquelon, islands which are located near Newfoundland but are actually French. Not French Canadian; owned by France. Andrea takes a job working at a bed-and-breakfast hotel, and befriends the owner's son, Philippe. After the drama which led Andrea and her family to St Pierre, the story is fairly gentle and uneventful, with a little hint of a youthful romance. It does help if you have a working knowledge of the French language, as there is a lot of dialogue which is left untranslated. 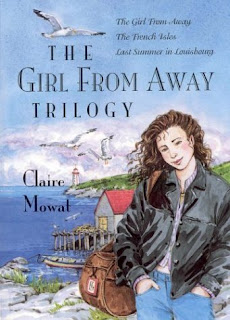 Last Summer in Louisbourg
Andrea is now fifteen and is vacationing in Cape Breton for the summer job to die for! She is childminding at the Fortress of Louisbourg, a job which involves dressing up in period costume and doing a fair bit of historical re-enactment. While working, she is offered a bit part in a film which is shot on location.  Again, Mowat sets the scene beautifully, and I envied Andrea her summer job. It was amusing to see how quickly the novelty of working on a movie set wore off, however, and Andrea came across as rather a sulky teenager, anxious that her costume makes her look silly, and objecting when extra filming spoiled her day's plans. I was a bit disappointed not to see the Newfoundland family this time around, or to hear anything else of Philippe, but there were some great new characters introduced: landlady Jackie and Andrea's verbose roommate Justine, as well as the cast and crew of the film, and Andrea discovers a family secret.

The Girl From Away trilogy is a lovely, easy holiday read ideal for girls aged about 9-12 years old.
Posted by Katie Edwards at 22:58