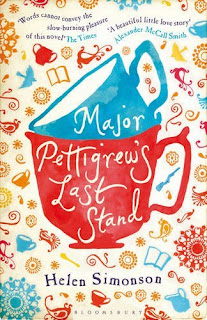 Major Ernest Pettigrew is an old-fashioned gentleman living in a quiet Sussex village. On the day of his brother's death, Mrs Ali from the mini-supermarket turns up for the newspaper money, and the two begin a warm friendship. Major Pettigrew is retired from the army, a bit of a "grumpy old man" with a biting wit, but a heart of gold. Mrs Jasmina Ali is a widow of Pakistani descent, fifty eight years old and resisting her family's attempts to retire her off and pass the running of the shop onto her nephew. They share a love of literature, and meet up to discuss books and drink tea, but as their friendship turns to love, Major Pettigrew and Mrs Ali have to contend with the judgements of their neighbours and families.
The village Major Pettigrew calls home, Edgecombe St Mary, is the sort of old-fashioned English community where everyone knows everyone else. A circle of gossipy ladies are the unofficial organisers of the village, as they run the social events and volunteer people to make themselves useful. Time and time again, Major Pettigrew finds himself in places and doing things he had never planned or wanted to do. Daisy the Vicar's wife and her gaggle of friends could be related to the knitting circles found in the later Anne books.

These awful women, as well as some of Major Pettigrew's relatives, can make for somewhat cringeworthy reading, with their snobbery and (perhaps) well-intentioned ignorance. Daisy et al make a career out of walking all over their neighbours and causing offense, spreading an epidemic of Foot-In-Mouth disease. While the main characters are realistic, three-dimensional people, the antagonists can verge on caricatures; surely no one can be that backward and insensitive all the time? Major Pettigrew observes the thoughtless comments towards Mrs Ali and her family, who seem to forgive and shrug it off, but careless-but-well-meant words mount up reveal a deeper prejudice, culminating in a disastrous dinner-dance.


Major Pettigrew's Last Stand is, despite the nastiness in some people's hearts, generally a "nice" book, written in a style reminiscent of Alexander McCall Smith, but with a caustic edge. It is a beautiful love story between an older man and woman, witty but sensitive, old-fashioned but still very relevant in its treatment of English society's attitudes to age, class and race.
Major Pettigrew's Last Stand is the last selection from the Richard and Judy Book Club for Spring 2011.

If you liked Major Pettigrew you may enjoy:
﻿The Help - Kathryn Stockett
The No. 1 Ladies' Detective Agency or Sunday Philosophy Club - Alexander McCall Smith
The Guernsey Literary And Potato Peel Pie Society - Mary Ann Schaffer and Annie Barrows
Posted by Katie Edwards at 14:12