﻿﻿﻿
﻿﻿﻿﻿
Anne of the Island is the third book in L. M. Montgomery's classic series about the imaginative redhead, and in many ways the end of "part one" of Anne's story. This is the book about Anne Shirley's college years, the last book about Anne the girl and the beginning of Anne the woman. It is also the last part of the story in which the community of Avonlea features prominently, and even now, despite the book's title, a good half of the the book's events don't even take place on Prince Edward Island, but in Kingsport, which is based upon Halifax, Nova Scotia. Even when the story is in Avonlea, I found it wasn't quite the Avonlea I knew. 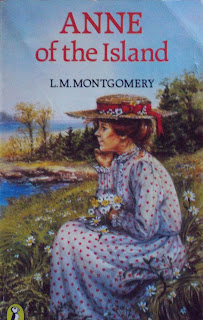 As a child, the only Anne books I owned were the first two: Green Gables and Avonlea, which I read over and over again. My mother had an old copy of Anne of the Island, so I was quite familiar with it, but less so. It comes as a shock that the community that seems more vivid than my own hometown in my memories, should be as I imagine it for such a brief time in the series - only two books out of the eight. Some characters have moved away, such as Reverend Allan and his wife - did they really appear so briefly? I knew them so well! Rachel Lynde, the town gossip, is still around but now living at Green Gables itself! Although this was due to happen at the end of Avonlea, it seems strange for her not to be down the road, but in the house itself, helping to bring up the twins. Anne's "bosom friend" Diana is engaged to be married, and for the first time, Anne has to face the death of her own school friend, Ruby Gillis, the bright, flirtatious girl who was always a little shallow and tiresome, but who made up a four with Anne, Diana and Jane Andrews on many an occasion. "Everything is changing - or going to change," said Diana sadly. "I have a feeling that things will never be the same again."
Not that there is much time to be melancholy, with Anne's whirlwind life at Redmond College, full of fun and friendships. She is reunited with two girls from Queen's Academy, Priscilla and Stella (who, alas, I can't really tell apart) and befriends the outrageous but adorable, frivolous and fun-loving Philippa Gordon. After a year living in boarding-houses, the girls rent a cottage of their own, a cute little house called Patty's Place, in a road full of grand mansions. Many pleasures of this book come from the simple domesticity of four girls and Phil's young-at-heart aunt Jamesina "Jimsie" making their house a home, and there is a lovely chapter in which Anne gets to visit the little yellow house where she was born.
﻿﻿

And as well as her female friends, Anne - no longer the skinny ginger kid, - receives proposal after proposal, each less romantic than the last, before she is swept off her feet by the story-book hero Royal Gardner, who seems to be the man of her dreams. Personally, I can't stand the man. He is too suave, too smooth, and knows all the right things to say to an idealistic soul which has been nurtured on romantic literature, but he has no personality. All his grand gestures come across as studied and fake, and it comes as a great relief when Anne comes to her senses. But it's not until it appears to be too late that Anne realises what everyone else has known for years, to whom her heart really belongs.