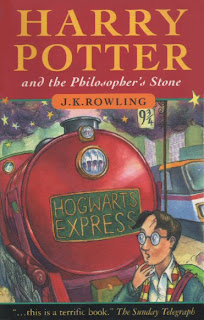 Isn’t it funny how your brain makes startling revelations when it’s winding down for the night? I was planning to start this review by explaining that, due to an enormous to-read pile, I couldn’t really justify rereading a seven-book series, but compromised by listening to the audio version of Harry Potter on my CD alarm clock. I’d got as far as explaining why Stephen Fry is the perfect narrator for the series, and describing him - like Hogwarts, like the series itself, as a British national institution, when suddenly it came to me: is not Stephen Fry the nearest thing we have to a muggle Dumbledore?
Maybe I drew this conclusion because Dumbledore is the nearest character within the story to a narrator, seemingly all-knowing, all-seeing and completely in control. Do I draw the connections because Fry happens to be reading the story, or are the similarities the reasons he was chosen? After all, they share many of the same qualities; both are wise and ridiculously intelligent, impossible to dislike with a comforting air to them; old-fashioned and a bit posh in a cosy, nostalgic sort of way. You feel that everything is under control in their hands. All Fry needs is the beard, the pointy hat and about another hundred years on his age.
But onto the story. Harry Potter and the Philosopher’s Stone (or Sorcerer’s Stone in the USA) is where it all began, the first in a series of books which revolutionised children’s literature and got kids - and adults - discovering the wonder of books, who might not have done so otherwise. With the hype surrounding the release of the later books and then the films, it’s a bit strange to return to the beginning and read (or listen to Mr Fry reading) as if it were all new.
Harry Potter and the Philosopher’s Stone has a very different feel to it than the later books in the series. It is noticeably a children’s book, written in simple language, with colourful, comical characters who are sometimes more like caricatures. We discover with Harry the wizarding world, a truly magical place, brought to life by Rowling’s vivid descriptions: Harry’s surprise that people in wizard photos move - and Ron’s surprise that muggle pictures stay put at all times; the novelty of going to school in a castle with towers, dungeons, secret passageways and staircases that lead to different places on different days, the wonder of flying on a broomstick and the thrill of playing Quidditch.

In later books, the wizarding world ceases to be quite so surprising - though there is something new to discover in each volume. The description gives way to plot: a plot with so many threads and strands that I am impressed and astonished at Rowling for keeping everything under control and weaving it all together in the end. Even in The Philosopher’s Stone, when the world is not yet fully formed and characters are still taking shape, there are hints at what is to come, throwaway lines that mean nothing and are forgotten until a later installment when they gain a new significance. I stand in awe of Ms Rowling’s mastery of her story - this is a writer who knows her story inside out.
Posted by Katie Edwards at 10:55