Wight Moon: Out of the Shadows, E.A. Berry 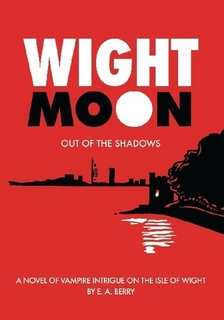 When Ann Grayson moves to the quiet Isle of Wight after a messy divorce, the last thing she expects is to find herself mixed up with a family of vampires! Alarmed at first, she soon learns that the Island vampires have coexisted peacefully with their human neighbours for well over a hundred years. But when missing young women start turning up outside the home of local businessman - and vampire - Joshua Ellis, unconscious, suffering severe blood loss and with puncture marks on the necks, this peace is threatened. Are the Island vampires as tame as they seem, or does someone with a grudge want to discredit them?

Wight Moon's author, Elaine Berry, is a friend from my theatre group, but I had no idea she had written and self-published a book until she turned up at rehearsal with the finished product. Wight Moon is a supernatural thriller, and Elaine does not mess around with introductions but plunges you straight into the action when protagonist Ann encounters a strange child alone in the cemetery. I don't know many books set on the Isle of Wight, so I enjoyed identifying local landmarks, and was amused by the addition of "friendly neighbourhood vampires" into the local mythology. Wight Moon does nothing to alleviate the impression that Islanders are a little, well, peculiar!

All fantasy writers have their own take on the mythologies they use, and Elaine's vampires have their own existance. In everyday life, they appear no different to human beings - no sparkly skin here! - but when they "turn" they take on the more traditional "vampire" appearance, with red eyes and prominent fangs. When in "vampire" form, and only then, they have additional, supernatural powers, such as deep hypnosis which they use (mostly) for the good of mankind, although they are not above turning on the "vampire sleep" for their own purposes.

Wight Moon is a gripping tale - as Elaine put it: "if you like twists, this one is plaited!" She creates suspense early on with short, choppy passages, alternating the mundane scenes of a mother and daughter at lunch, with the kidnapper hiding in the daughter's flat, waiting for her return. The book is full of humour, shown in the day-to-day lives of the vampire family, such as her matter-of-fact description of Mary, the baby vampire, with a mug of blood in one hand and a rusk in the other. If I hadn't already known Elaine, I might have guessed she was a connoiseur of Gilbert and Sullivan in a scene between Mary and her uncle that culminates in a groan-inducing pun reminiscent of Pirates' "Often/Orphan" gag. The book works well as a stand-alone novel, with a satisfying tidying-up of loose ends, but finishes off with a wonderful sequel-hook which sent me off to Elaine to offer my services as proof-reader for book two. A really enjoyable read.
Posted by Katie Edwards at 11:15