Upper-class Margaret Prior, after recovering from a long illness, takes on a position as “Lady Visitor” to the women’s wards at Millbank Prison. There, she meets Selina Dawes, a professing medium, imprisoned for fraud and assault. Margaret becomes fascinated by Selina and as the two women grow closer, she finds herself drawn under Selina’s spell. But is Selina a clever fraud, or does she really possess unearthly powers? 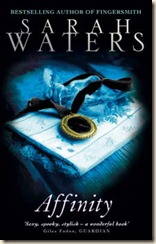 I’ve read two of Sarah Waters’ novels before this one: The Little Stranger which I loved, and The Night Watch which left me cold. Although ser in the Victorian era, Affinity has a lot in common with The Little Stranger, with its eerie atmosphere and possibly – possibly not – supernatural elements. Waters’ prose is beautiful, immediately drawing me into the story, creating an atmosphere of suspense and perfectly recreating the language of the era, so that I could quite believe I was reading a contemporary of Charles Dickens or Wilkie Collins. The novel is written in two plot threads: the main story being presented as Margaret’s private journal of 1974, interspersed with entries from Selina’s medium’ log book from a year or two previously, which showed how she came to find herself in prison.


Much of the story takes place in Millbank prison, which is where the two women meet and interact. Waters describes the harsh, dehumanising conditions of the Prison, again, in a Dickensian manner. Margaret’s role as “Lady Visitor” is to befriend the prisoners and exert a good influence over them, to encourage them to repent of their crimes and reform their lives, yet the contrast between her and them seems too big for this to be more than wishful thinking on the part of the prison authorities. Margaret’s first encounter with Selina highlights the seemingly insurmountable differences between Visitor and prisoner – yet, in many ways, she is not so different from them after all. Margaret is outwardly a dutiful daughter, sedate, proper and genteel, but beneath that veneer she is frustrated, imaginative and highly-strung. Ultimately, Selina is the character with the influence.

Waters’ exploration of Victorian Spiritualism made a fascinating novel. The common conception of the Victorian age is rather a puritanical one, everyone being prim and proper and with the urban myth of people covering their piano legs for modesty! But it was also an era of discovery, and people found the world as they knew it quite turned upside-down. Anything might be possible! Affinity, like the two aforementioned classic, is a proper gothic novel, creepy and eerie, with seemingly clear lines blurring, between life and death, madness and sanity, real and imagination. I did not quite trust Selina through this novel and racked my brains trying to work out how she managed her “tricks,” or whether she was a genuine medium. There seemed to be no natural explanation for her accomplishments.

But were my suspicions of Selina right? In The Little Stranger, Waters leaves the ending ambiguous, and I wondered whether she might do the same here, to leave the reader to work out for themselves what had happened. Does Waters answer all the questions? Well, Affinity is such a wonderful read, I couldn’t possibly spoil it for you – you’ll just have to read it for yourself. All I will say is that there was a wonderful twist at the end, one that Waters has set the plot up for, and yet you shouldn’t see it coming. Affinity is a gorgeous and very satisfying tale, and I’m keen to get my hands on the rest of Ms Waters’ work. An excellent novel.

If you liked this you may enjoy:
The Little Stranger, Sarah Waters
Little Dorrit, Charles Dickens
The Woman in White, Wilkie Collins,
Film: The Illusionist
Posted by Katie Edwards at 15:29