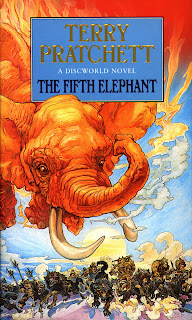 Samuel Vimes, Commander of the Ankh Morpork City Watch and Duke of Ankh, is sent as an ambassador to Uberwald, for its coronation of the Low King of the Dwarfs. Uberwald is a wild country, home to werewolves, vampires, dwarfs and trolls. There is unrest between traditional and more liberal, modern-thinking dwarfs which could mean war, and when Vimes arrives, it is to discover that the Scone of Stone* has been stolen. Without the Scone, there can be no coronation - no Low King - no order.

Meanwhile, Watch Sergeant Angua has also made her way to Uberwald. She is a werewolf trying to make the best of her condition, but her family are perfectly happy with eating their neighbours or anyone else who might get in their way, and they, too, want domination of Uberwald. Angua’s boyfriend Captain Carrot, second-in-command of the Watch, has handed in his resignation and set off after Angua, leaving “one of nature’s sergeants,” Fred Colon, in charge at Ankh-Morpork.
Terry Pratchett’s Discworld books are always good comfort reads, and without a doubt my favourite sub-series is that which features the Watch. Yet, The Fifth Elephant and Jingo are not books I’ve re-read as often as the other Watch books. These two are not set entirely in Ankh Morpork, and therefore don’t have quite the same feel to them. By now, the city of Ankh Morpork is quite as much of a character as Vimes, Carrot et al, and has come to shape what I expect in a Discworld novel.

It is an absolute pleasure to read about Vimes, a very unwilling ambassador and a policeman to his core, defying convention, rubbing everyone up the wrong way and generally abusing his diplomatic immunity as an excuse to be as undiplomatic as you can imagine, getting away with it with sheer cheek and audacity. Sam Vimes prods some serious buttock.

We also see a vulnerable side to the sarcastic, tough-girl Angua. The Fifth Elephant contains an interesting explorations of the conflicts of a werewolf: neither human nor wolf and despised by both. Angua lives her life constantly fighting to remain decent and civilised, paying for the chickens she’s eaten in her wolf shape “because animals don’t,” and terrified that she might turn out bad, like her psychopathic brother Wolfgang. 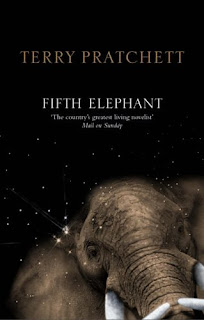 I read the Discworld novels in no particular order, and it’s a little odd to see the first introduction of an element that I’ve got used to as a stock feature of the novels. In The Fifth Elephant, we meet for the first time the "Igors," the race of hunchbacked, scarred, henchmen who serve any self-respecting Uberwaldean household. (I suspect the Igors owe a lot to Igor Eye-gor in Young Frankenstein, and certainly all the other Igors he was based upon.) It’s strange to see Vimes getting confused by the fact that they are all called Igor, startled by an Igor appearing when he knew he had just left the room and closed the door, or it slowly dawning on Vimes that when an Igor offers to lend another Igor a hand, or swears that his heart is in the right place, he is not talking metaphorically. Later in the series, the Igors are just accepted with all their little ways alongside all the other strange residents of the Discworld.
On this reading, I found The Fifth Elephant to be a little bit heavy-handed with its theme of tradition versus progress, with Pratchett clearly favouring progress, which ends with the Low King using a metaphor of the ceremonial axe that has been in the royal family for hundreds of years… although the blade has had to be replaced a few times, and the handle, or the metalwork, until nothing is left of the original - but dare you say it is not the same axe? Still, The Fifth Elephant is a rollicking adventure, great humour and character-development. It’s not one of my favourite Discworld novels, but it is still a lot of fun.

*Yes, I do mean it that way around. Dwarf baking is notoriously solid and doubles as weaponry - or in this case, the coronation seat of the dwarfs.
Posted by Katie Edwards at 22:46